The activity data for May suggests China's growth is slowing down again (chart 1). This was not driven by direct effects from the trade war via weaker exports. On the contrary, export growth held up at a decent level in May and beat market expectations by a significant margin.

Instead, the slowdown has been mainly driven by the slowdown in domestic demand which weakened on the back of less policy support and possibly indirect impacts of the trade war escalation fears.

Faced with the rising risk of further deterioration of the growth outlook over the rest of year, Chinese policymakers have started to move ahead in shoring up support for the domestic economy. The most recent effort was PBOC stepping up liquidity support for smaller banks after the weak economic data for May was released.

Meanwhile, the smaller banks are also allowed to expand eligible collateral scope to qualified bonds including negotiable certificates of deposit (NCDs) and commercial bills when obtaining liquidity support from PBOC.

Expectations of more liquidity loosening in response to a re-emergence of the economic slowdown were already surfacing in May.

Against this backdrop, foreign investors were pouring their money into Chinese onshore bonds actively during most of May. Their inflows into China's bond market amounted to as much as USD11bn that month, more than four-fold of April's number. More specifically, of the USD11bn, 67% went into Policy Bank bonds and the remaining 33% was taken up by MOFs (chart 2). 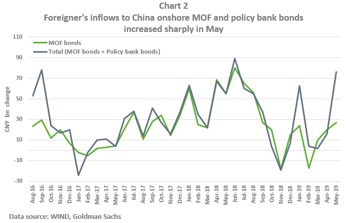 With the Fed easing cycle ready to kick off, there should be more room for PBOC to loosen its monetary policy. On this, we expect the 10-year MOF yield will revisit year-low 3.06% by the end of Q3 (chart 3). 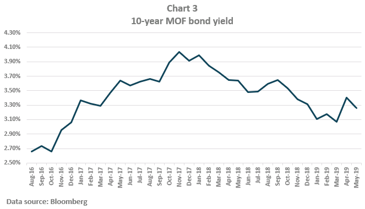