Recall, we delivered the below predictions respectively in two issues of this publication last month:


Basically, both predictions have already materialized as 10-year CGB yield already reached as high as 3.23%, fresh high of the year, in the middle of this month (October). That's 11bp higher than September 18's closing level.

Fundamentally, September's money supply and loan figures were announced some days ago, indicating post-pandemic credit expansion is still in good shape. That, we think, will make policymakers accelerate the pace of counter-pandemic monetary stimulus exit. As such, there is good chance liquidity will become less ample over the rest of Q4. That combined with plentifulness of bond supply as a result of the heavy fiscal spending (chart 1) will continue to keep bond yield under upward pressure. Thus, we won't be surprised if the 10-year CGB yield finally revisits 2019's year-high 3.44% by the end of the year (chart 2). 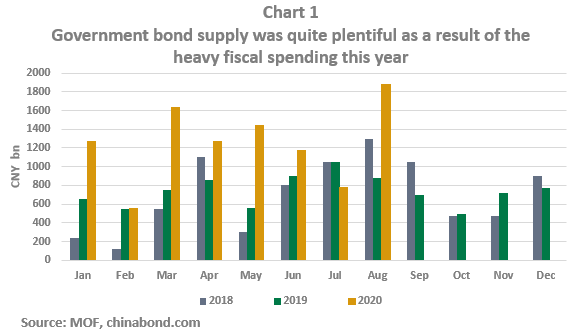 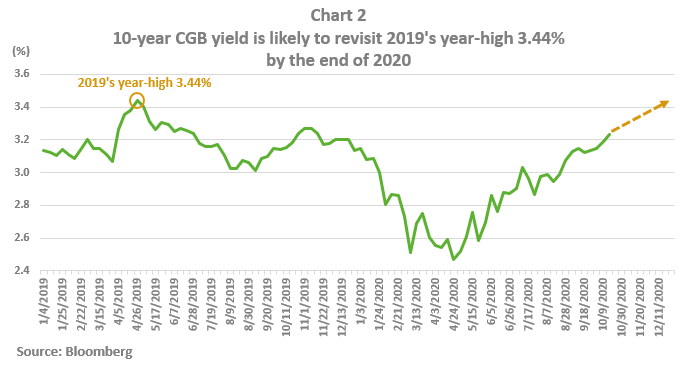 Last but not least, recent steepening of onshore CNY IRS curve (chart 3), in our view, reflects that counter-pandemic releveraging is already phased out and that what happens next could be policymakers' growing bias in favour of deleveraging (already happening to the property developers), which is definitely not a positive to the bond market. Recall, we saw notable steepening of onshore CNY IRS curve alongside with selloff in CGB bonds in Q4 2017 after President Xi stressed the importance of financial risk control in spring that year. 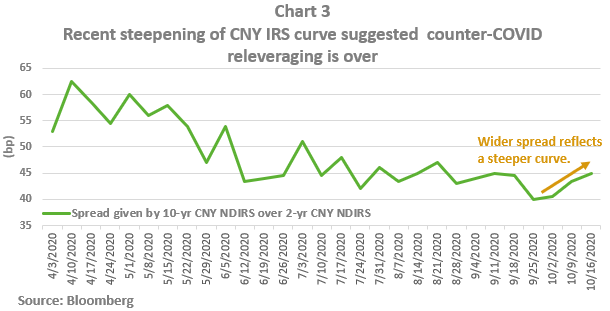