EM investors are again caught in a trade war waiting game. The overall effect of the US-China failure to reach a trade deal on EM Asia FX is negative. Needless to say, CNY is in the eye of the storm, which has lost 1.3% since the US extra tariffs on the USD200bn of Chinese goods that came into effect on 10 May. Apparently, the US and China are in much deeper conflict this time round than last year. As far as CNY FX is concerned, we think Beijing is more biased in favour of currency depreciation as one of the retaliatory measures for two following reasons:


In response to the market speculation over a potential sharp depreciation of the CNY, PBOC made comments accordingly. Deputy governor Pan Gongsheng had an interview with PBOC-owned newspaper China Financial Times a week after the new tariffs came into effect, saying "PBOC has the confidence and capability to maintain FX market stability, as it has accumulated rich experience and policy tools in facing FX market volatilities, and will adopt necessary counter-cyclical adjustment measures and enhance macro prudential management".

In our view, Pan's comments reflected PBOC's desire to avoid rapid CNY slide instead of its resistance against currency depreciation. Recall that PBOC officials in the past usually said "CNY FX is at appropriate level", "there is no ground for CNY depreciation" or "the current level of CNY FX is fundamentally justified" when they wanted to tell the market that they had no intention to let CNY depreciate. However, Pan in the interview somehow avoided saying anything like that.

After Pan made the comments on CNY FX, PBOC did have a lower-than-consensus USD/CNY fixing for a couple of days (chart 1). We're not surprised by this because the experience learnt in the 2016 CNY FX turmoil tells us PBOC sometimes likes to use action to reinforce its statement. However, what we actually experienced in 2016 was that a frequent lower-than-consensus USD/CNY fixing just reflected PBOC's intention to slow down the pace of CNY depreciation. 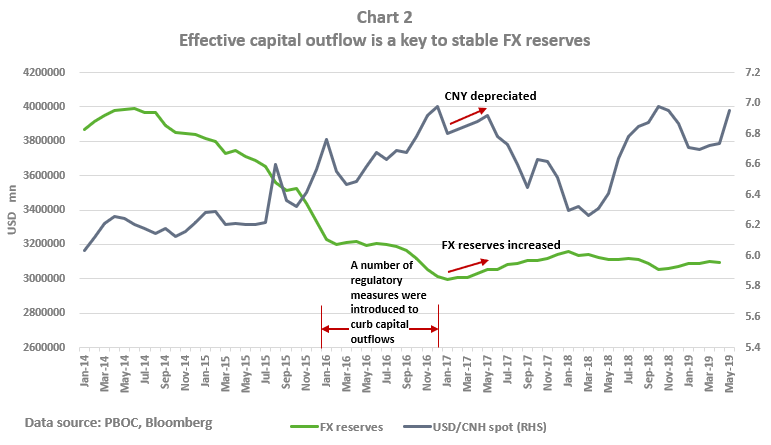 In our view, as long as capital outflows are being effectively controlled and as a result the downside of FX reserves is well-protected, PBOC would feel okay with currency depreciation this time round. We think Beijing has strong confidence in the effectiveness of the regulatory controls over the capital outflows implemented since 2016. As a matter of fact, we saw CNY depreciation accompanied with no reduction in PBOC's FX reserves during the first 5 months of 2017 (chart 2), which is a strong proof of the effectiveness of those capital outflow controls.

Strategically, we reckon USD/CNY will reach 6.99-7.00 area by the end of Q3. This target can be reached much sooner if the US-China trade war intensifies further after Trump meets with Xi at G20 summit in late-June.