China Insight: Deleveraging Re-emphasized as The Risk of Slowdown Reduced

The Politburo held a regular meeting on economic affairs on 19 April, two days after the better than-expected 6.4% Q1 GDP growth was released. We here below list out the key takeaways from the meeting:


Overall, the tone of the meeting statement was less dovish than before, after we saw a strong rebound in loan supply (chart 1) and stabilized GDP growth in Q1. Fiscal expenditure increased as much as 15% y/y in Q1 (chart 2). China's top leaders may already be aware of the possibility of high fiscal expenditure growth in Q1 overdrawing the fiscal revenue due to the generous tax and fees reductions. 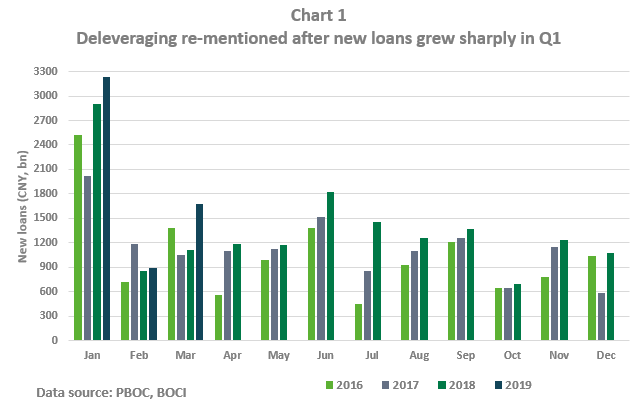 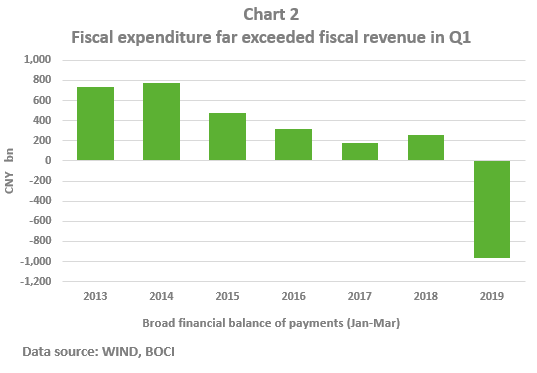 The top leaders, who sound more optimistic about the outlook of the economy, might have intentionally sent a warning shot to the market given the strong recovery of the equity market. After learning the experience of a boom and bust in 2015, they now are apparently concerned about potential bubbles, especially in the equity market.

Interestingly, two issues, which were not touched in the Politburo meeting on 13 December 2018, were surprisingly mentioned again on 19 April. The first issue was deleveraging and the second one was housing. In our view, China's top policymakers are highly wary of the risk of being over-leveraged amid the strong rise in loans as a percentage of deposits (chart 3). 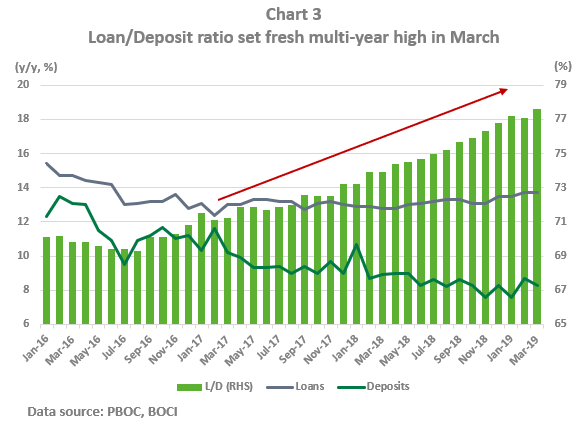 The central government is getting back to the stance of structural deleveraging with a bias towards managing the market expectations to avoid runaway credit expansion, though it vows to maintain proactive fiscal policy. We believe the central government will refrain from loosening monetary policy further, at least over the summer. Besides, we expect the policymakers will not further loosen the financing condition for LGFVs as they want to keep local governments' contingent debts well-controlled. All of these suggest there is more upside than downside room for CNY IRS curve. We like to be a payer for 5-year non-deliverable IRS (currently trading at 3.30%) with 3.48% as the initial upside target.