Investors: Capture the wisdom of the crowds ahead of UK Elections

UK General Elections have had a long-standing tradition of running on a Thursday. The most cited reasons for the election falling on a Thursday, has been town ‘market’ days which increased the chances of footfall, another, there appears to be a concomitant increase in voter turnout. No one wants elections, for instance, on a Friday, where pay days could lead to a rise in the number of newly-paid, and newly inebriated, voters at the polls!

For statisticians, the voting turnout is a crucial parameter. The most accurate forecast before the latest general election in 2017 came from the pollster who generated the best fit for this parameter. In the Brexit referendum, the higher turnout was directly associated with the unexpected result.

Turnout is not the only parameter, but rather, a single setting derived from a massive set of parameters providing a true election forecast. That is why, for each election, we have a different pollster making the most accurate forecast, ensuring no single pollster always beats the others.

Investors always take polls with a ‘grain of salt’. They tend to average surveys, giving more weight to some than others. We can summarize these efforts as attempts to artificially replicate ‘the wisdom of the crowds.’ This term was first used by Aristotle in his book ‘Politics’ referring to ‘combined judgment of a group of people rather than that of a single authority’. This wisdom of the crowds, on the other hand, can also be captured by other datasets, such as EPFR fund flows.

The chart below shows cumulative fund flow into UK equities over the forty weeks around the last five General Elections and the Brexit referendum. 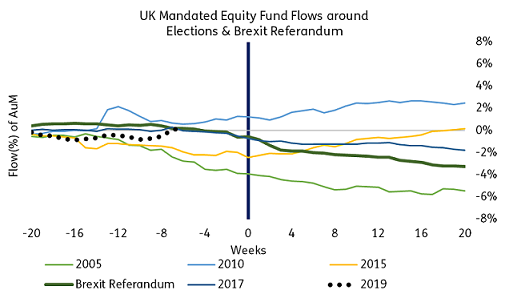 One can also use the flow predictor of Srimurthy et al. [1] to understand positioning towards the pound. For any currency, this is four-week cumulative flow into all the countries using that currency from cross-border equity funds. The chart below shows the rank Sterling amongst ACWI currencies, in terms of that four-week flow predictor, over the forty weeks around the last five General Elections and the Brexit referendum. 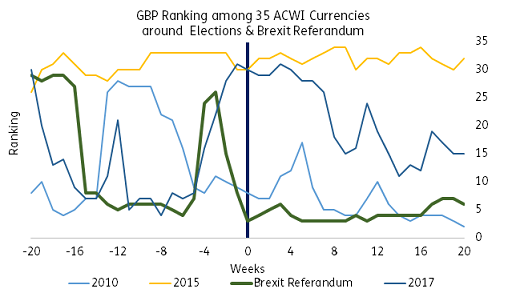 The UK will have a crucially important election on December 12, 2019. The positioning towards UK equities could be an essential input to identify the general opinion of voters. In this, and many other ways, EPFR data can help investors capture the wisdom of crowds around important key events.