30 Jun 2020 by Natalie Rivett
Topics: Industry News |
Provided by IGM FX and Rates |
Get a free demo
Login to IGM

The BCB's strong intervention that signalled officials are likely to defend the psychological 6 mark sent the USD/BRL plummeting almost 20% from its mid-May record highs to levels last traded in mid-March, near 4.8000 in early June. However, much like its Usd/EM peers, Usd/Brl has found support off its early June lows and has subsequently trimmed the pullback from record highs by almost half (at the time of writing), as markets turned to weigh the impact of policy stimulus and the reopening of economies with the recent rise in coronavirus infections.

The broad consolidation in Usd/EMs of late has led to a discussion of whether the EM FX recovery of the past couple of months has run its course. We are of the opinion the second-wave virus headlines are unlikely to have a lasting impact amid what appears to be limited political appetite for a return to lockdowns (that could stifle the economic recovery), but EM FX markets could generally still struggle to return to pre-coronavirus levels this year. Investors may ultimately want to be more selective going forward, considering, among other things, varying economic projections and carry gain outlooks.

The Real is one EM currency in particular that we retain a cautious outlook over the medium-term, with little scope seen for it to shed its title as the worst performing major currency ytd (USD/BRL +23%). This is based on a combination of factors, most notably lingering political risks and a deep economic crisis caused by the coronavirus that should keep fiscal risks elevated in H2. Plus, the continuation of a rather unattractive carry. We explore these factors in a little more detail below: 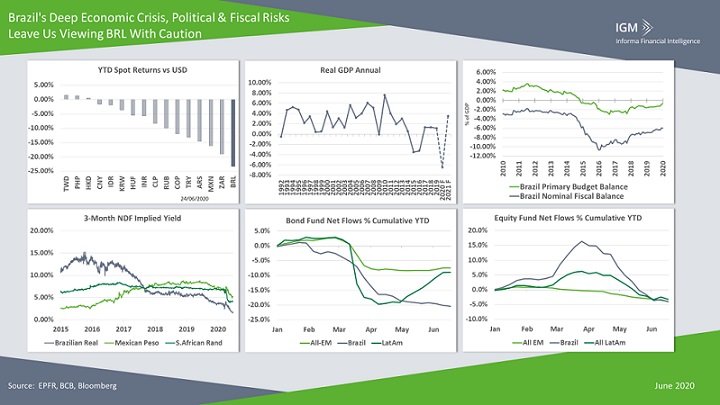 Brazil is seeing an unrelenting rise in coronavirus infections that have exceeded 1mn cases and with a total of more than 50,000 fatalities so far - both of which are the second highest in the world, after the US. Investors have largely shown a willingness to overlook these figures as the country's major cities of Sao Paulo and Rio de Janeiro pushed ahead with the easing of lockdown, allowing a number of non-essential businesses and venues to re-open. This, amid pressure from business groups and President Bolsonaro, who has repeatedly played down the pandemic.

However, the virus is ultimately deepening Brazil's economic slump, risking corporate bankruptcies, soaring government debt and a continued rise in unemployment in a nation with already strained finances. The World Bank is predicting a contraction of 8% and potentially as much as 10%, thus taking an even dimmer view than economists surveyed by Brazil's central bank that are forecasting a slide of 6.5% For the World Bank, Brazil's slump will be worse than that seen in Mexico (-7.5%) and throughout much of South America, exceeded only by Peru (-12.0%).

Unemployment is a particularly pressing issue in a country where only a third of the population have access to savings. The seasonally adjusted jobless rate in the first 3-months of the year was 12.2% and is likely to increase in the near-term, with the Bloomberg economist consensus forecast for the year at 14%, a near 2ppts increase on 2019, though some estimates are much higher. These figures, of course, do not take into the vast informal sector that bears the brunt of the economic shutdown, contributing to the marked impact on consumption in which retail sales plummeted to a record 16.8% m/m in April.

The coronavirus outbreak has already prompted an emergency support package of more than BRL1.1tn from Brazil's government, more than the entire projected savings from the landmark pensions reform that was due to save the state USD250bn over the next 10-years. Pressure for government spending to revive the economy has been growing, but with little room for fiscal measures, the government predicted in late April it will post a primary budget deficit of around 8% for 2020 and a nominal deficit, excluding interest payments of 12-13%, thus, unwinding all and more of the fiscal improvement of recent years (see the dashboard). According to recent remarks from Treasury Secretary Almeida, the primary deficit could even reach 10% in the event of more tax deferrals or a new tax debt refinancing programme.

Crucial to the fiscal outlook is the spending cap rule that limits growth in public spending and investment to the previous year's rate of inflation. Even in the face of a weakening economic outlook, Brazil must resist calls to lift this cap that has been in place since 2016, and return to a strong fiscal tightening bias to prevent the government debt trajectory from entering an unsustainable path higher, but this may create political friction.

With the virus response and the economic crisis dominating the agenda and President Bolsonaro seemingly locked in destructive political bickering with state institutions, it appears unlikely the economic reforms programme will be resumed anytime soon. Key reforms, such as an overhaul of the tax system and the granting of central bank autonomy, have disappeared from the agenda. Economic Minister Guedes warned recently that the country's recession may become a depression if pro-market reforms are not resumed.

As we discussed in a previous viewpoint, Bolsonaro has done himself no favours in recent months and his popularity ratings have tumbled. Although the risk of an impeachment is not yet significant - the immediate focus will stay fixed on steering the economy through the coronavirus crisis - it has the potential to develop as such, should investigations yield potentially damaging findings against the president and should he face problems further down the line in securing Congressional support (his relationship with Congress is already strained).

Long gone is Brazil's carry appeal. As can be seen in the dashboard, BRL's 3-month NDF implied yield has fallen to 1.5% from 15% five years ago and is now several percentage points below the equivalent rates for the Mexican Peso and South African Rand for example (see dashboard).

Subdued inflation that is running significantly below this year's 4% target and set to undershoot again next year (3.75% target) and together with uncertainties about an expected economic recovery in H2, prompted the BCB, in its June meeting, to leave the door open for an extension of the easing cycle that started in July last year, in a reversal of May's policy guidance.

Even if the central bank limits this further easing to a further 25-50bp more cuts in the coming meetings, potential difficulties in raising inflation and slowly rebounding inflation expectations amid a weak growth environment could ensure rates remain low for longer. Unlike LatAm peer Mexico, for example, the one-year inflation breakeven for Brazil still has some way to go before returning to pre-crisis levels (at 2.5% currently, vs 3%+ from January to early-March).

The near-term outlook is still favourable for the Real, per the charts, which are suggesting a re-opening of the June 8 low of 4.8194 for USD/BRL. However, the broader uptrend is still in tact and we would be inclined to use any pullback from current levels as an opportunity to establish a long position on the basis of Brazil's deep economic crisis and heightened political and fiscal risks.

As highlighted below, above 5.3870 is required to avert the downside threat and suggest an uptrend resumption re-opening the 5.9700 record high. 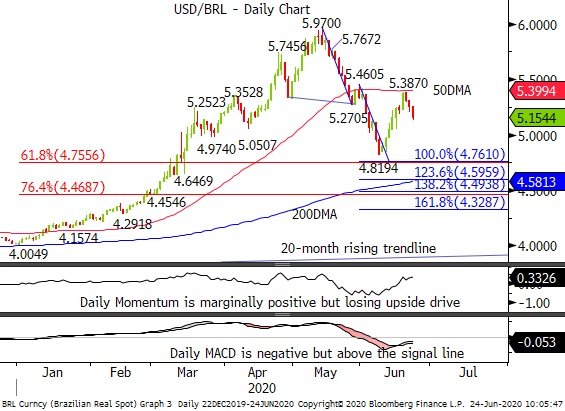