On 1 June, PBOC announced several new measures to support small and micro-sized enterprises (SMEs). The most important one is an additional re-lending facility of CNY400billion yuan to support SME credit loans. The PBOC plans to use this re-lending facility at zero interest rate to purchase 40% of new SME loans (with a maturity of six months or longer) issued by qualified regional banks between March 1 and December 31 this year. Simply speaking, PBOC provides, at zero interest rate, 40% of the funding for each loan issued by commercial banks to SMEs, while the banks will bear the default risk of the underlying loans (chart 1). 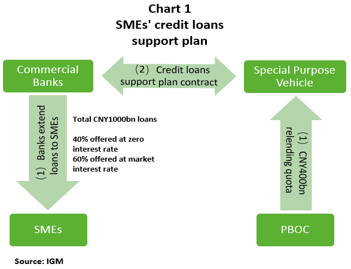 The above-said measure was regarded as an official QE once it was announced. That combined with PBOC's refusal to lower the 7-day reverse repo rate in the recent OMO injections suggests PBOC, instead of lowering interest rates further, would rather loosen liquidity via other unconventional measures. On expectations of no more rate reductions in the near term, interbank repo rates traded upwards further (chart 2) and bonds were sold off more brutally (chart 3) after the new measures were announced. 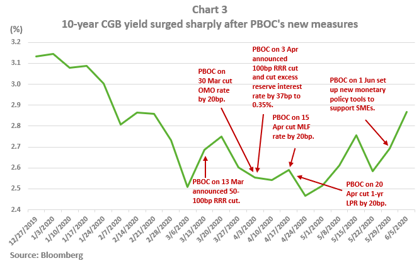 It's too early to say whether the bull market is already over and the bear trend is already kicking in. Let's see what happens after a PBOC medium-term loan facility (MLF) expires on 8 June.