Chinese onshore bonds saw a reduction of net inflows to USD2bn in October, down 82% from a month ago (chart 1). Foreign investors' net purchase of CGBs slowed to USD2.2bn, down 70% from September. Meanwhile, policy bank notes and NCDs saw small outflows of -USD0.5bn and -USD0.8bn respectively, vs an inflow of USD2bn to each of them in September. We attributed the slowdown in bond inflows largely to bear-steepening of the CGB yield curve as a result of the growing reluctance of PBOC to ease monetary policy in an environment of rising CPI inflation. 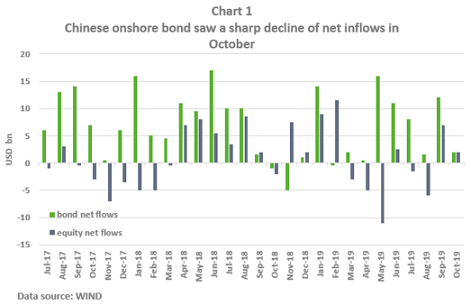 Slowdown of inflows to Chinese onshore bonds could be putting more pressure on capital outflows. It's worth noting that net capital outflows have increased notably since 2H18, but they have remained at manageable levels over the past few quarters (chart 2). For now, it is hard to say whether Washington and Beijing will reach phase-one trade agreement in the near-term. A failure to reach a trade agreement inevitably will prompt RMB FX depreciation. However, even so, we don't think severe capital outflows, like those we saw 3 years ago, will happen again. After all, capital controls have been much tighter since 2016. 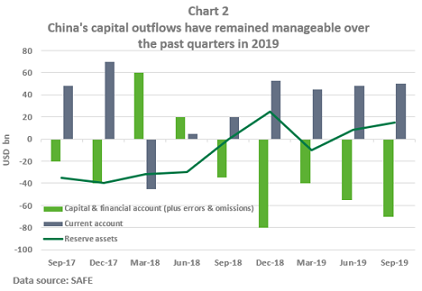 With regard to the USD/CNY FX rate (chart 3), the 7.00 level, which used to be the ceiling during the 2016 RMB turmoil, might have now become a key support. In our view, a failure of Washington and Beijing to reach phase-one trade agreement will prompt an upside retest of 7.20 and subsequent attempt of 7.30. On the other hand, a downside revisit of 6.85 will happen if both parties succeed in establishing a trade agreement. However, since China has already entered a slow-growth era, we don't expect an RMB appreciation, if at all, will be sustainable even if the sentiment is cheered by a US-China phase-one trade agreement. 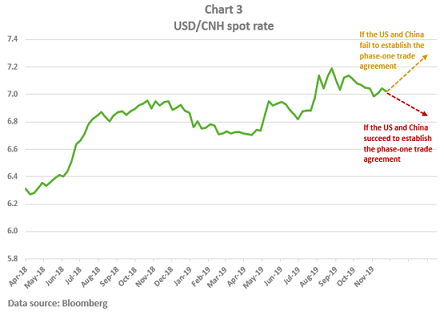