EM Viewpoint: Belarus and Russia - will the 2014 Ukraine playbook be used

Since the Presidential election on August 9th, Belarus has been gripped by mass protests, triggered by a belief that the election was rigged in favour of the incumbent, longtime leader Pres Lukashenko. According to the much derided electoral commission, Lukashenko won the election with 80% of the vote, whilst the main allowed opposition Svetlana Tikhanovskaya, who was registered as a candidate in place of her arrested husband Sergey Tikhanovsky, got 10% of the vote. She has insisted that where votes had been properly counted she had polled 60-70%.

The scale of the opposition rallies in protest of this result are unprecedented for Belarus: more than 100,000 were reported to have turned up in central Minsk on 16 August, while a rally for Lukashenko was much smaller. There is a growing sense of momentum and belief that Lukshenko, who is known as Europe's last dictator, may finally be forced to step-down. This has left Tikhanovskaya as the de-facto leader in waiting, who at the moment has fled to Lithuania for her and her families safety.

Can Belarus decide its own future?

For Belarus, whilst it may be able to ultimately decide to get rid of Lukashenko and hold new fair and free elections, it will be Russia and more specifically President Putin who will decide on the country's long-term future. This is because Belarus is just too strategically important to Putin and itself is too reliant on Russia, for the two to be pushed apart.

Throughout his own extended time in power, Putin has followed a similar narrative to ensure Russia's sphere of influence over the old Soviet states, to ensure its role of leader of the Eurasian region and to push back against the West (EUR and Nato). Starting with Georgia in 2003, Putin has used a number of tactics to stop its neighbours becoming more democratic and more European, either via election interference or direct/indirect military intervention (latest being annexing the Crimea from Ukraine in 2014). The Kremlin's overreaching geopolitical goal is to simply maintain Belarus as a buffer between it and the west, and to deepen the Union of States agreement into a Eurasian Union that rivals the EU.

Hence he has officially offered his “assistance" to Pres Lukashenko, so that he “resolve the problems" post-election. There has also been talk that Russia should use “polite people", the euphemism for the little green men, or Russian soldiers with no insignia, that were used to annex Crimea, to restore order in Belarus. However, this option has been ruled out by most regional experts.

On the Belarussian side, the economy is so deeply integrated with Russia, any government can not afford to alienate Putin. Russia takes a third of Belarus' exports, which in return receives half its imports from Russia. Belarus also depends on Russia for its energy and thus has too much to lose whoever is in charge, which means that there should be no need for military intervention.

Russia to let this one play out

Belarussian Pres Lukashenko went on TV on August 15 to announce that he would ask Russian Pres Putin to help Belarus “restore order" as the protests threatened the whole former Soviet space. However, the Kremlin has said little to suggest it is looking to interfere militarily in Belarus.

Russia would provide military support to Belarus, on request, in case of an external military threat as part of a collective security agreement. But this guarantee does not extend to internal civil opposition to the regime. Indeed, the Russian Foreign Ministry has been so far careful not to come out in support of either side.

This is different to Ukraine/Crimea, as the whole Belarusian population seems almost entirely united in its opposition to Lukashenko and there is a renewed sense of Belarusian national identity, as symbolised by the wide spread use of the red and white pre-Soviet flag as a symbol for the protest movement. Back in 2014, Putin had a relatively simple task of manipulating the cracks between Crimea and the Ukraine, with a large number of Crimea residents holding Russian passports.

Thus it is expected that Putin will allow the protest to run their course, but when they are over and a new leadership is in place, this is when Moscow will start wielding its power.

There has already been a sharp sell off in the Belarus' 2031 USD750mn bond, which was issued in June, with the yield peaking at 7.82% on Monday, up 119bp since the election, whilst the spread over USDs has jumped back out to ca +750bp, levels last seen since the pandemic peak.

There has also been a weakening in the Russian 10yr OFZ bond, with the yield climbing ca 35bp since the Belarussian election to 6.24%, the highest in 4mths. 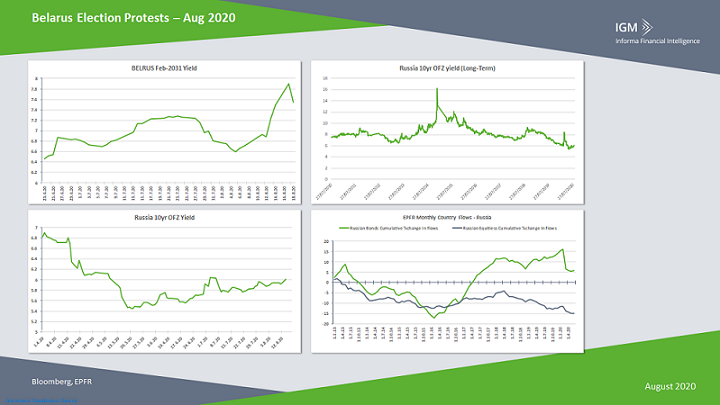 The worst case scenario for Belarussians in themselves would be that Lukashenko, who has been reluctant to sign up to Putin's deeper Union State plans, holds onto power, throws himself at Putin and promises Belarus to the Union State. Even if Lukashenko is removed, the worst case scenario for Russian and Belarussian investors, which is military intervention by Russia, may still occur. If Belarus looks like it is moving closer to the EU, Putin may resort to his Ukrainian playbook and send in the “little green men" and cut off the Russian oil and gas until he has the outcome that is best for Russia.

Under such a worst case scenario there is potential for Russian 10yr OFZ yields to spike higher, but how long this will last is uncertain as Russia is already under sanctions from the EU/US over the Ukraine invasion in 2014, and there remains questions over the appetite for further penalties on Russia. The situation could however turn more perilous for Putin if the democratic candidate, Biden, wins the November US election, as this is expected to lead to a tougher US stance on Russia and the potential for more drastic sanctions, which will only intensify if Russia intervenes in Belarus.

Thus looking back at 2014, when Russia annexed Crimea, incurring the wrath of Western sanctions, the yield on the 10yr OFZ surged to over 16%, and EPFR fund flows data showed that investors accelerated outflows from Russian bonds and equities. Since then investors have never really got back into Russian equities, but have rushed back into bonds, which suggests there could be an even larger outflow from Russian bonds this time around.

Our technical analysis suggests the 10yr OFZ yield could spike up to 6.58% on any renewed sanctions angst. 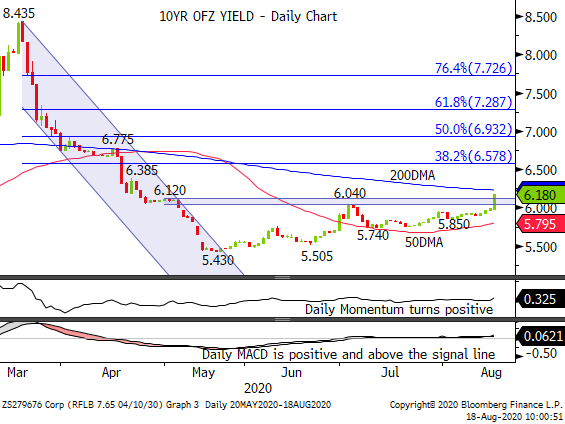