When Italy sent shock waves and growth fears through markets this week, the bond market set off its own alarm bells on the health of the economy.

In this case, the "alarm" was the so-called "flattening" yield curve, which briefly reached its flattest level in a decade Tuesday. The flatter the curve, the more traders watch it as a warning for future economic weakness — or even recession.

The curve is a term that describes the relationship between shorter-term Treasury yields and longer-term yields. The closer the two are, the flatter the curve. In this case, the 2-year note yield has risen more than the 10-year yield, winnowing the distance, or spread, between them to a thin 41 basis points. That is the flattest the curve has been since 2008.

"Basically we are in an unstable equilibrium. Rates should not be where they are. They should be a lot higher," said Joseph LaVorgna, chief economist for the Americas at Natixis. "Whenever markets wobble, or people have fears of systemic risk, like Italy...markets get nervous."

Fears that Italy's political crisis could lead to a government that would choose to exit from the euro sent investors running to the Treasury market for safety on Tuesday. Investors worried Italy would cause chaos in Europe, slowing the economy there, and that would also spillover to the U.S. economy.

Yields, which move opposite price, fell sharply at the long end of the curve, more so than at the short end. The 10-year yield, at 3.12 percent just a few weeks ago, fell to around 2.75 percent.

The panicky trading subsided Wednesday, and the 10-year rose to 2.85 percent, while the 2-year yield edged up to 2.40 percent, making the spread between them 45 basis points.

The worry sets in when the curve flips, or inverts. History shows that when this happens and the 2-year yield rises above the 10-year, it is a reliable signal that a recession is coming. 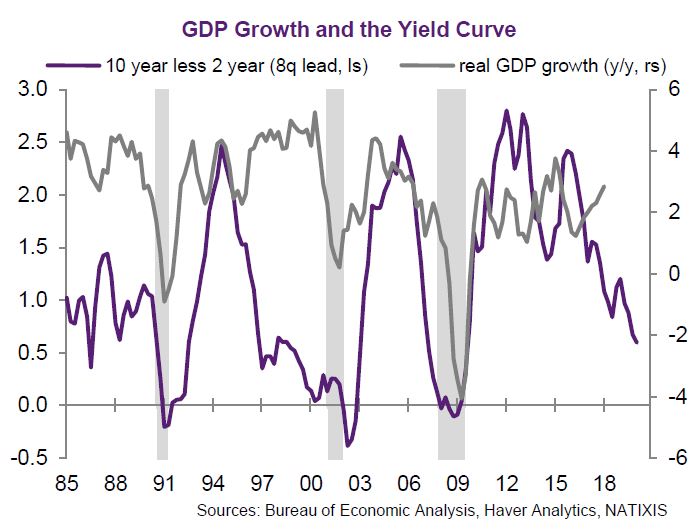 LaVorgna and bond market pros say it's the Fed that is helping to flatten the curve. The 2-year yield most reflects Fed policy, and it has been rising. It reached a recent high near 2.60 percent on expectations of more interest rate hikes. The 10-year has been creeping higher too, but the lack of rising inflation on one hand, and fears about events like Italy or even trade wars that could hurt the economy on the other hand, act as counterweights.

"The Fed has a very powerful say here... in the shape of the curve," said LaVorgna. He argues the Fed kept interest rates at "emergency" low levels for too long, inflating risk asset prices. But now it should cut back on its outlook for rate hiking, and perhaps raise interest rates one more time and then see if more inflation can come back into the economy. That would slow the curve flattening.

"It's telling you right now the Fed has way too much tightening priced in," he said. "Just take the fed funds rate to 2 percent, let the balance sheet run off and maybe accelerate it. Get out of the market and see what happens." He said the Fed is forecasting six more rate hikes, while the market expects about three.

LaVorgna does expect the yield curve to invert at some point, and it will be signalling a recession. On average, recessions occur about 15 months after the curve has inverted, he said.

As yields fell Tuesday, the stock market sold off and risk assets weakened.

"What's particularly notable about this is the flatter curve comes in the context of last week's FOMC minutes which people deemed to see as somewhat dovish," said David Ader, Informa Financial Intelligence chief macro strategist. "My point being you would have thought there would be some relief on the flattening in light of those minutes...I think it's very telling. If not the Fed, it's Italian politics or populist politics or whatever that is doing it."

Ader said the bond market was set up for a rally, meaning lower rates, even before Italy spooked the markets and sent buyers into bonds. "The market was already setting up for a bullish correction for rates. Credit spreads were widening. The dollar was doing better, and a lot of overseas data was weakening. I think we were setting ourselves up for a move and sentiment was very oversold. I think Italy did it," he said. But he does not expect yields to move much lower for now.

LaVorgna said Italy could be a factor slowing the Fed if it continues to rattle the markets, but it may not be the cause of the next recession. "Europe's growth is much stronger now than it was seven, eight years ago. It's got more of a buffer than it had before," LaVorgna said, adding that the European Central Bank is still involved in the sovereign debt market and it could increase purchases, if necessary.