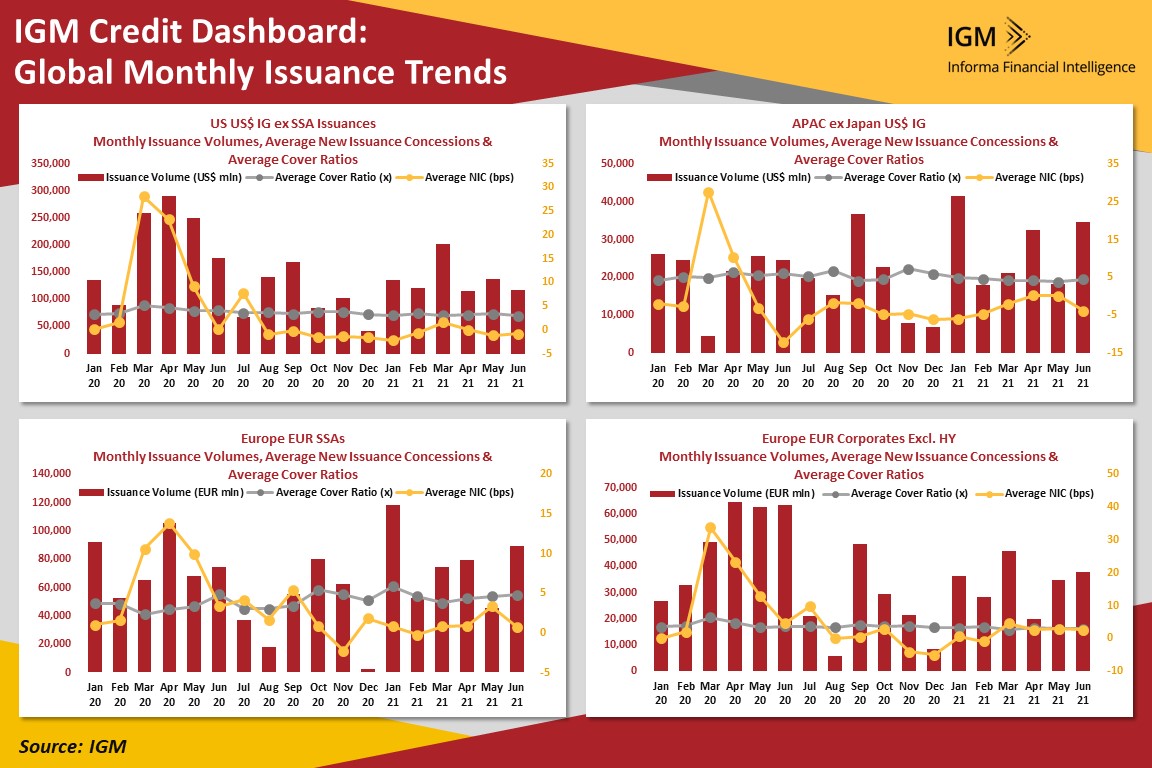 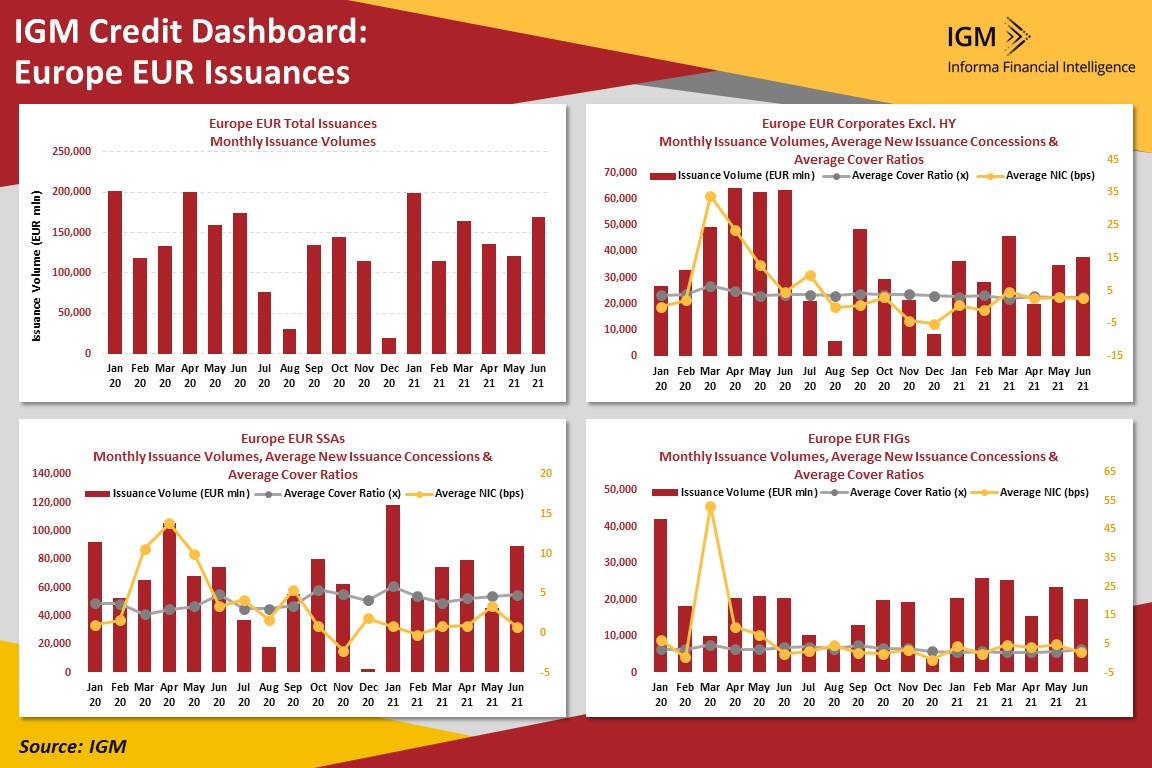 The overall pace of euro supply picked up sharply in June as markets remained receptive and issuers locked in funding before the summer lull. In all, supply rose by 40% from May to EUR169.245bn (all asset classes/ratings) but there were some huge variations. SSA (+95%) drove the increase while FIG (-14.7%) was the only asset class to see lower supply.

Corporates (ex HY): June supply finished up at EUR37.74bn, making it the second biggest month of the year after March. This year's June total got nowhere near the corresponding month last year though, with June 2020 having seen a jumbo EUR63.49bn raised by corporates to plug earnings gaps during the early part of the Covid-19 pandemic. ESG paper remained a key theme, with EUR13.82bn of the month’s overall issuance coming via ethical trades. EUR6.1bn of that total came in the ever-growing Sustainability-Linked format with Worley, Eni SpA, Enel, UBM Development and Repsol all out. Average NICs eased in June, staying in low single digit territory.

FIG: Falling supply was evidently not the product of lower demand. On the contrary, the average cover ratio rose to its highest level since November while the average NIC was the smallest since February as cash rich investors chased down the reduced supply on offer. Issuers also cut pricing (from IPTs to reoffer) by the most this year. In the ESG space it was a month of firsts for a host of issuers with debut Green sales from UniCredit (Senior), UBS (OpCo), Belfius Bank (SNP), Banco de Sabadell (SNP), Groupama (Tier 3) and Tier 2 sales from ING Groep, Raiffeisen Bank and Bayern LB while La Banque Postale brought its first Social SNP and Generali brought its first sustainability Tier 2.

SSA: The second busiest month of 2021 behind January’s all-time record saw issuers retain pricing power where NICs fell as cover ratios rose for a third straight month. European Union was once again the volume booster, providing 39.2% of June’s much larger supply (up from 31% in May). Republic of Italy (18% of total supply) was the month’s second biggest issuer of paper which included a rare FRN.

Covered: June’s EUR8.6bn qualified the month as the second busiest of 2021, taking the year to EUR48.65bn. Issuers experienced variable conditions which improved toward month-end. The month produced the first Australian CB for over two years (National Australia Bank) and further issuance from recently resurfaced New Zealand issuers (Bank of New Zealand). Swedish supply also restarted in June, with Swedish Covered Bond Corp selling the first out of the country this year. By maturity, issuers favoured the belly with 54% of June’s issuance in the 7-8yr bracket while tens - the favoured tenor so far this year - accounted for 26%. In the ESG sector, Green covered issuance received a boost during the month thanks to lines from EIKA Boligkreditt and Oberbank while Korea Housing Finance Corp sold social notes. These all helped to take 2021’s YTD ESG CB issuance above any full year total before it.

HY (Corporate): Issuers continued to make hay while the sun was shining as the market registered the highest volume month in 2021, a year that has seen issuance top EUR10bn in four of the six months so far. With investors still keen to lock in yield, and the shorter duration and (relatively) high coupons offering a little more protection from nascent inflation worries, some EUR13.745bn was printed in June. The month also saw new records for HY ESG issuance, with June not only recording the highest monthly volume to date, but also the largest individual note, Picard’s 3.875% July 26 senior secured sustainability linked offering. 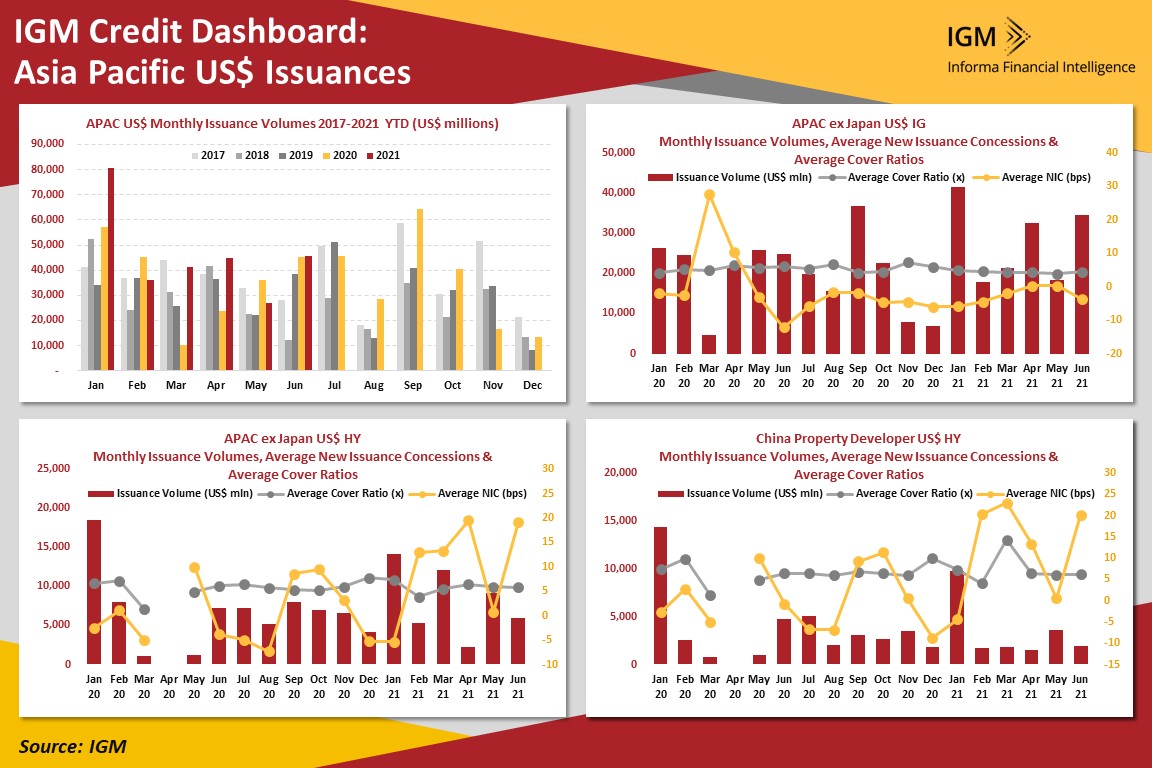 Momentum in the APAC US$ primary bond market picked-up sharply in June 2021, underpinned by a handful of jumbo US$2bn+ transactions from the likes of Softbank Group Corp, Republic of the Philippines, Republic of Indonesia, Macquarie Group and Export-Import Bank of Korea, which helped propel total supply to US$45.781bn in the month (including Japan).

That marked the second busiest month of the year after January’s record breaking total, as a slew of high grade regional issuers rushed to capitalize on accommodating funding conditions amid a tightening of investment grade credit spreads and a fall of long-end underlying government bond yields.

The total comfortably surpassed the US$26.787bn which materialized the previous month of May 2021 and also marginally exceeded the US$45.05bn which priced in the same month in 2020, when the primary market was still tentatively re-opening for some Asian higher yielding credits in particular post coronavirus.

Non-Japanese investment grade issuers had a blockbuster month in June 2021, selling a combined US$34.623bn worth of paper, which was once again the second most active month this year and was also ahead of every month in 2020.

Moreover, the majority of IG issuers were given an enthusiastic welcome by investors as reflected by comfortably oversubscribed order books which paved the way for them to lock-in some attractive funding costs.

That is underlined by the average new issue concession which came in at -3.74bp (negative) on average for investment grade issuance in June 2021 (excluding Japan), returning into negative territory for the first time since March 2021. That was supported by an average cover ratio of 4.49 times.

While investors proved keen to add inventory for the region’s high-grade borrowers, a number of Asian high yield names found them more discerning and less willing to part with their cash.

That was particularly true for Chinese property developers which continued to underperform the broader offshore secondary credit market, as participants continued to grapple with concerns regarding the financial health of China Evergrande, the nation’s most indebted real estate company, as well as heightened regulatory scrutiny, rating downgrades and a hangover from high profile defaults earlier in the year of China Fortune Land Development.

Meanwhile, just US$1.97bn of June’s total was contributed by high yield Chinese property developers, down from US$3.585bn the previous month but still surprisingly the third most active month for the asset class in H1 2021.

That underlines the difficulty faced by many property developers to access the offshore bond market for much of this year, as does the inflated premiums that many of those who did manage to secure funding were forced to pay for the privilege.

The average new issue concession paid by Chinese HY developers was back around 20bp in June 2021, close to the peak seen earlier this year in Q1. 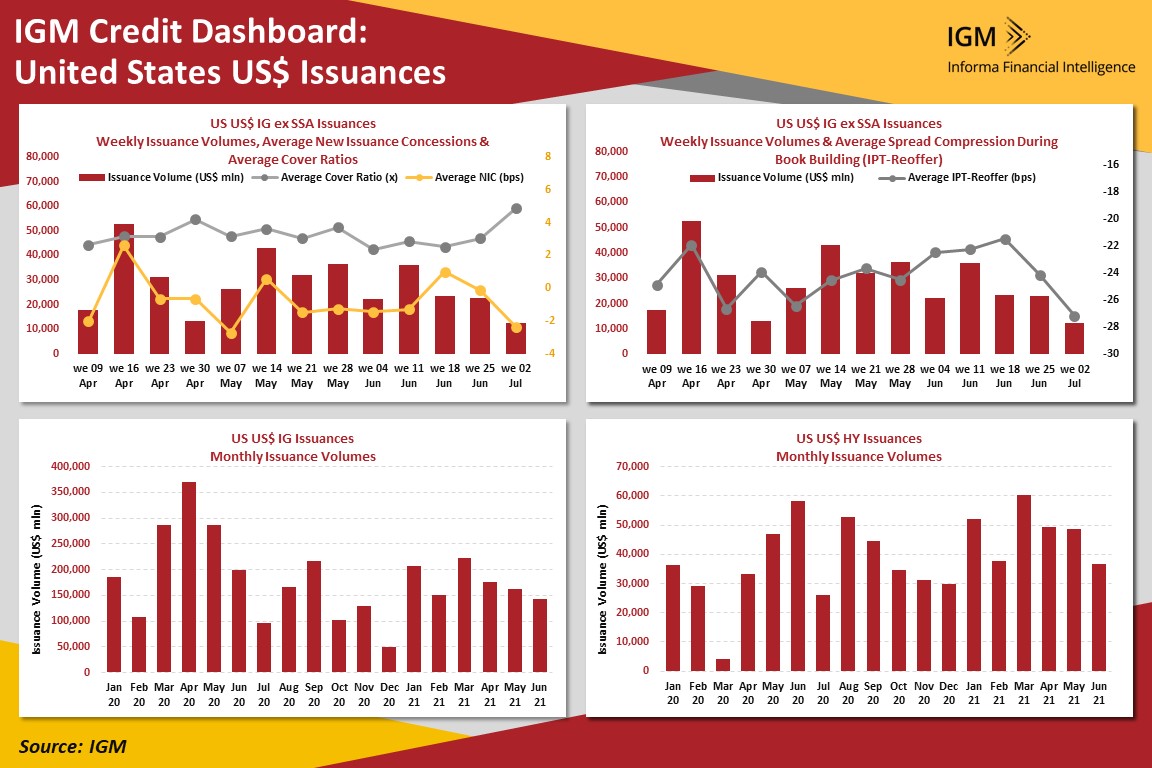 Overall US IG (SSA-inclusive) issuance settled at US$142.1bln, representing the fourth consecutive month issuance volumes have declined and the lowest issuance month year to date. Lower volumes came after the Fed jolted markets by raising its inflation expectations and signalled that interest rate hikes would come sooner than expected. That said, the first half was still the busiest on record, excluding last year's and the second quarter was the busiest on record, excluding last years.

SSA issuance picked up slightly in June but was still down from April's heady pace, at US$24.95bln, to account for 17.5% of the total IG issuance, well down from April's 35% or US$60.86bn. This left the bulk of the attention to fall largely on US IG EX SSA deals.

US IG EX SSA volumes fell 15% over the month of June to US$117.15bln and were well behind March's mammoth US$201.2bln volume to also be down 33% versus last June's volume. That said coming into the month, the Street was looking for, on average, US$100bln in ex-SSA issuance to cross the tape, a figure that was topped as well as the highest estimate of US$113bln. With June's volume in hand, high grade borrowers also extend their US$100bln-plus monthly issuance streak to six months.

June's issuance was dominated early by a pair of surprise quasi-jumbo deals from two of the “big six" banks, namely Goldman Sachs ($5bln) and Bank of America ($4.5bln) and which saw financials comprising 61.5% of June's total. However biggest deal of the month was Salesforce.com's US$8bln 6-pt offering to help fund its US$27.7bln acquisition of Slack Technologies. The bond spreads on the deal were judged to be about 20bp-25bp away from fair value at the IPT stage and they tightened by about 20-25bp through bookbuild for a final pricing that was judged to have no new issue concessions. Books had touched up to $32.4bln by midday and final was $28bln with the 7yr sustainability note garnering $3.9bln of orders.

In general, funding conditions remain conducive, with our sentiment indicators showing the average new average concession on US IG EX SSA deals that priced in June remaining in negative territory at c.a -0.78bp vs -1.20bp in May and after widening to 1.63bp in March. The average coverage ratio dipped slightly below 3.00x whilst the spread compression during book building came in at -23bp on average.

Looking ahead, according to the results of our monthly issuance poll, on average, the Street is looking for US$91.3bln in ex-SSA issuance to cross the tape in July. July is normally a relatively slow issuance month and coupled with a busy first half, where issuance was front loaded by companies ahead of an anticipated increase in interest rates, this has created some uncertainty in the supply outlook.

BofA Global strategists on the one hand argue companies still carry sizeable cash war chests accumulated last year, and hence may chose not to roll maturities and the M&A pipeline, resulting in relatively low issuance implications. But on the other hand, demand could create supply and the combination of historically low yields and, with spreads at post-crisis tights may attract opportunistic issuance. Companies could also choose to front-load supply into July should rates remain stable.