Investors clamor for more supply despite volatile backdrop
MAY 2021 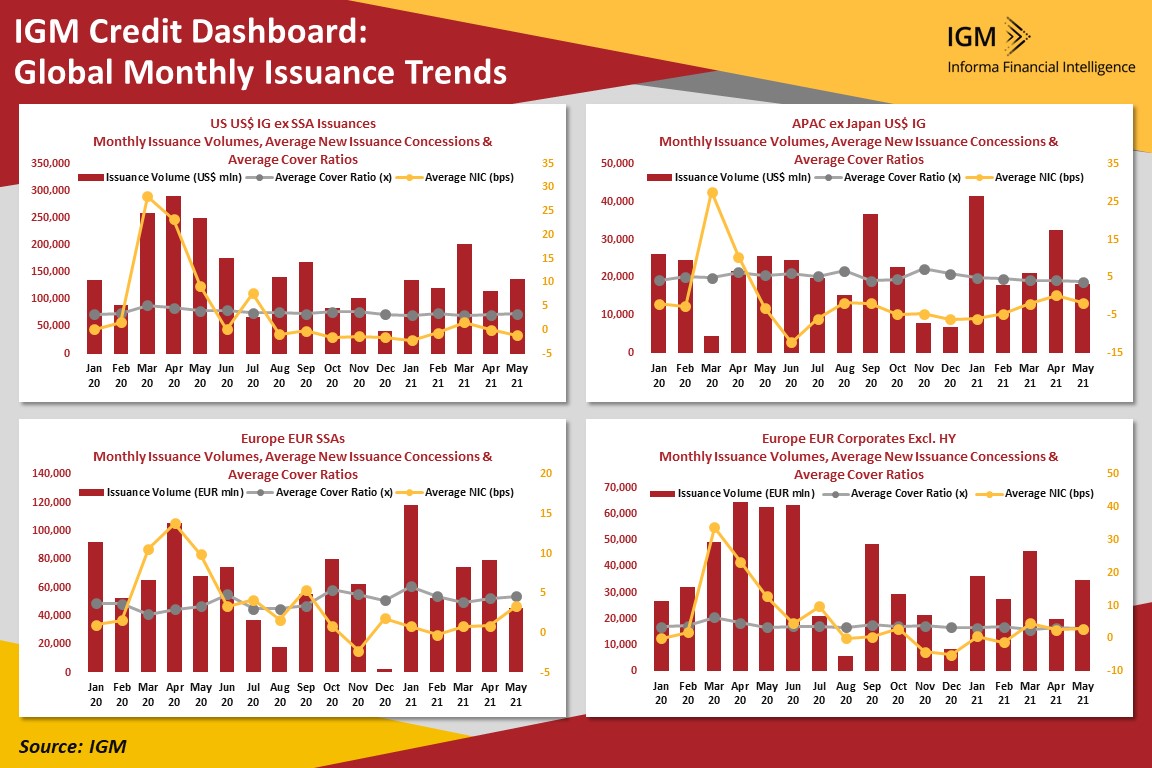 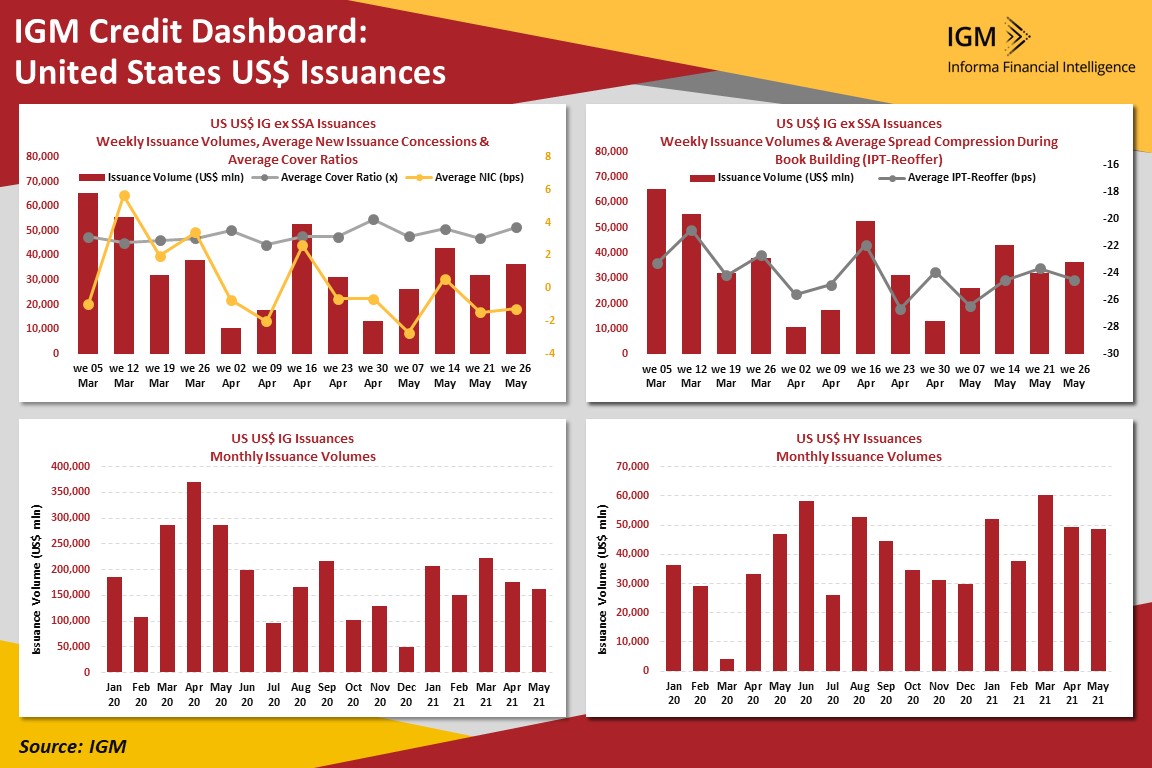 Overall US IG (SSA-inclusive) issuance settled at US$161.105bln. Whilst down 8% from April's volume, it not only topped the average estimate, but the highest ($160bln) as well, making it the fourth busiest overall issuance month of the year.

SSA issuance slowed considerably from April's heady pace, pulling back to US$27.35bln, to account for a mere 17% of the total IG issuance, well down from April's 35% or US$60.86bn. This left the bulk of the attention to fall largely on US IG EX SSA deals.

IG EX SSA volumes picked up ground to US$137.855bln, in the second busiest issuance month of the year, behind March's mammoth $201.2bln and up 20% versus April' s volume.

The devil was in the details, with May's issuance boosted by some of the headiest deals we've seen all year. Amazon raised US$18.5bln in the second largest deal of the year, while AstraZeneca and United Healthcare raised US$7bln each. JPMorgan Chase chipped in twice, raising a combined total of US$6.5bln.

As is normally the case immediately following earnings season, the month of May was dominated by domestic issuance (66%), with industrial/corporate concerns making up 60% of that total. Overall, the sector accounted for 42% of May's ex-SSA issuance, followed by bank/finance (20%) and utilities (4%).

While the broader markets busied themselves with concerns over a spike in inflation, something the Fed believes is temporary, thus - staying the course of monetary easing policy - the bond markets behaved with much more discipline which ensured corporate issuers continued to access to the primary market irrespective of the backdrop.

Indicative of improving funding conditions, our sentiment indicators showed the new average concession on ex-SSA deals that priced in May pulling back further into negative territory to c.a -1.20bp vs -0.01bp in April and after widening to 1.63bp in March. The average coverage ratio similarly rose further above 3.00x whilst the spread compression during book building held at -24bp on average.

In fact, investors are now seen clamoring for more supply, with the last two "official" days of May resulting in nearly $30bln of new issue supply which were supported by books that were oversubscribed by an average 3.83x. These oversized books reveal the amount of money still out there looking for a home.

Looking ahead, the month of June has consistently ranked as the tenth busiest issuance month of the year, averaging just US$87.539bln, despite last June's record US$176.771bln in ex-SSA issuance. However, from what we're hearing, June could yield north of US$100bln. As long as investors continue to exhibit their seemingly unquenchable thirst for corporate paper, this average estimate should not present too much of a problem for issuers.

US High Yield: Riskier assets also had another busy month, with the high yield primary market seeing seventy-two (72) tranches priced, totaling US$48.6bn in volume, in the largest volume on record for May's. May's volume built on what is an already record second quarter for volume, with year-to-date, high yield issuance currently at US$247.759bln. Issuance highlights included sixteen (16) tranches priced that were US$1bn or more in size. Biggest deal was by T-Mobile, USD 3bn 3-tranche, which upsized from $2bln originally planned. 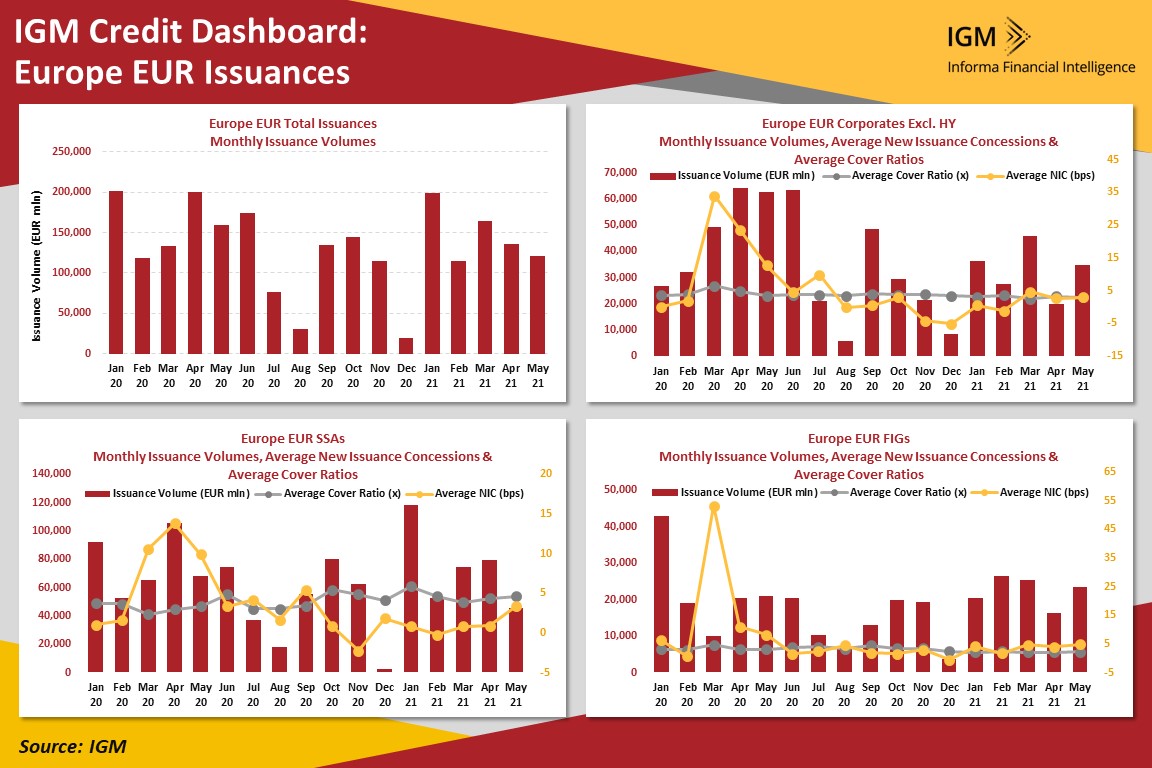 The overall pace of euro supply eased in the European primary market during May, falling 11% to EUR120.975bn (all asset classes/ratings) but that masked some huge variations between sectors. SSA (-42%) drove the fall, seeing its slowest month of 2021 while FIG (+43%) and Corp (+74%) issuers stepped up funding activity aggressively, emerging from earnings enforced blackout to find receptive conditions.

Corps (ex HY): ESG trades were prevalent in the IG corp market once again and included another three Sustainability-Linked Bonds as the fledgling sector continued to grow. There was also the first ever single currency Social Hybrid issue, courtesy of EDF, which raised EUR1.25bn via a PNC7 line that was 1.84x covered. Despite rising supply, NICs and cover ratios held broadly steady, suggesting investors had both the desire and the means to add inventory.

FIG: Recovery bets, a more reflationary mindset and steeper yields curves underpinned sentiment towards FIG borrowers. That saw investors continue to tolerate modest NICs in a month where the Stoxx600 Banks Index notched up a string of pandemic-era highs. The positive tone toward financials helped drive a series of well received subordinated trades including Deutsche Bank’s first euro AT1 deal since 2014 that was a huge hit and rallied strongly in secondary.

SSA: EU’s SURE was the volume booster (31% of May supply) while Germany added a third point (30yr) to its Green bond curve. There was some evidence that rising yields and inflation jitters were handing increased pricing power to SSA investors though as average NICs nudged higher for a third straight month

Covered: The EUR8.35bn raised during May was slightly down on April but still met general expectations. The month saw the re-emergence of New Zealand covered bonds, the first from the jurisdiction in over two years thanks to outings from ASB Finance Limited and Westpac Securities NZ. However, rising volatility toward the end of the month saw some signs of stress emerge with NICs climbing and average cover ratios falling. Looking ahead to June and supply is expected to remain at a similar pace (ca. EUR8bn) with an average of EUR8.01bn having been sold monthly so far this year.

HY (Corporate): It was another strong month for HY issuance in the single currency with May 2021 volumes surpassing every other May in the IGM database. Year-to-date volumes are running at over twice the pace seen during a lockdown impacted 2020 and are also more than double those seen in the first five months of 2019. Once again ESG paper proved a popular sell with Verallia notching the lowest primary market coupon of 2021 with its 1.625% May 26 senior unsecured SLB, while economic optimism allowed issuers like Golden Goose to clear long held bridges and TUI Cruises to print paper in one of the most challenging sectors. 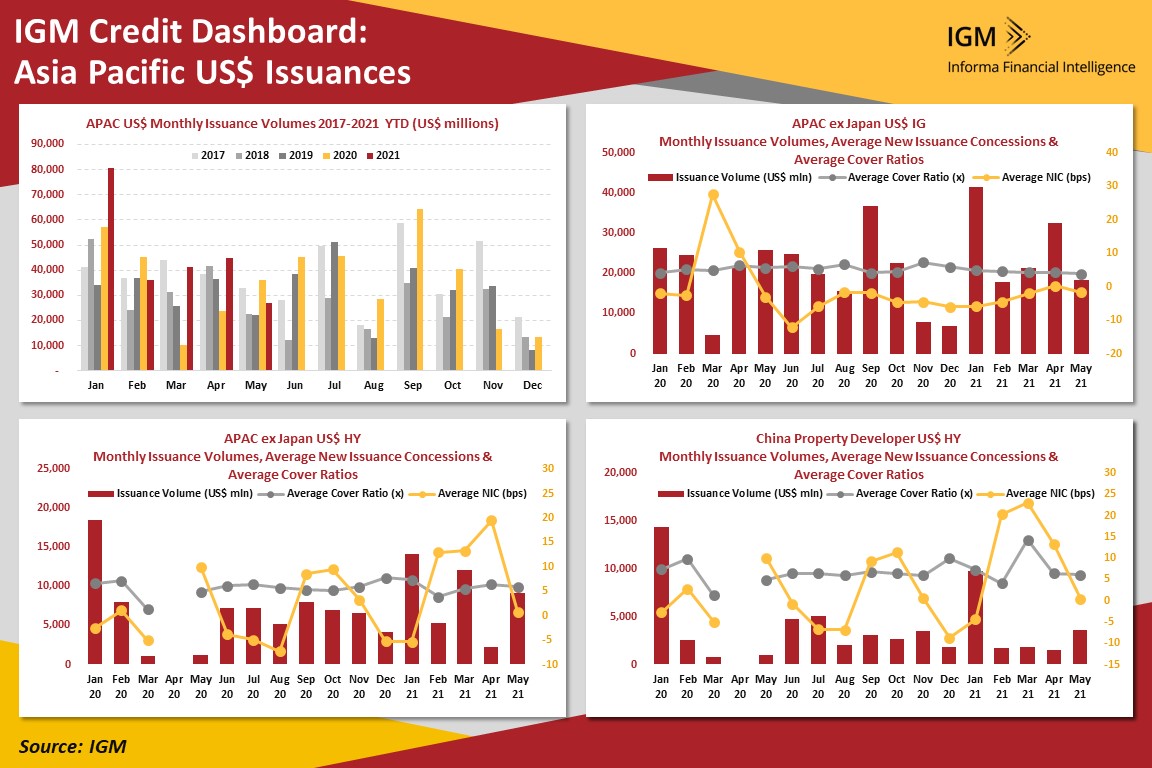 A late spurt of issuance in the final week of May 2021 bolstered total APAC US$ issuance volume in the month to US$26.787bn. However, that still marked the lightest volume week so far this year by some margin and was also well below the US$35.985bn of supply that materialised in the same month last year, when the primary market was still struggling to regain fluidity for higher beta APAC issuers in particular post pandemic.


Discerning investors were forced to navigate their way through heightened inflationary concerns as well as ongoing fears surrounding the financial health of some offshore issuers, including Chinese state-owned distressed debt manager China Huarong Asset Management. May 2021 was also a month peppered with public holidays across various regional centres which also served to derail primary market momentum.

One encouraging trend in the month though was a recovery of high yield issuance, which bounced back strongly to US$9.177bn in May. That was a sharp jump from a particularly dismal previous month of April which saw just US$2.277bn of high yield supply make it over the line.

That improvement, which maintains what has resembled a monthly rollercoaster for APAC high yield issuance volumes year-to-date, was in part attributed to a mini-revival of offshore supply from Chinese property developers, which rose to US$3.585bn in May.

A slew of issuers proved keen to capitalise on an upturn in investor sentiment towards the sector after three consecutive months of subdued activity, hampered by contagion from the failure of Chinese Fortune Land to service its offshore debt obligations earlier in the year along with increased regulatory scrutiny within the real estate industry.

The improved mood was also illustrated by a sharp decline of funding costs for Chinese high yield property developers in May, which no longer had to pay such eye-catching premiums to fund offshore.

The average new issue concession slumped to around zero in May having peaked at well over 20bp in March 2021, while deals were comfortably oversubscribed overall during the month as illustrated by the cover ratio of over 5.0x on aggregate.

While regional high yield issuance volume enjoyed a constructive month in May 2021, that was not the case for APAC US$ investment grade activity, which fell sharply to US$18.21bn. That represented the second lowest monthly total so far this year for the rating class and was well down on the US$32.61bn which priced the previous month. May’s total also fell short of the US$25.694bn which materialised in May 2020.

The funding landscape was largely accommodating for the majority of regional investment grade issuers however, as illustrated by the average new issue concession which dipped back marginally into negative territory. That was supported by an average level of oversubscription just shy of 5.0x on aggregate in May 2021.