Viewpoint: SA budget may have done enough to stave off a Moody's downgrade

Usd/Zar initially spiked on the 2019 budget announcement, to reach a new high since early January of 14.372, but has since sharply reversed course to trade below the 14 handle for the first time this week.

This would suggest that, upon reflection, the market does not consider the budget so gloomy as to raise the risk of an imminent downgrade of the sovereign credit rating to junk by Moody's. Indeed, although the debt/deficit and GDP outlooks have all worsened since the October medium term budget, they have not grossly deteriorated (see the below dashboard).

There were also some positives, in the shape of a reduction in the public sector wage bill over the next few years and more importantly, the government's assurance that financial support to Eskom will stop short of taking on debt, as had been requested by the troubled state utility.

As widely expected, a significant portion of the budget announcement was dedicated to Eskom, which has been the source of the Rand's EM-leading losses this month amid renewed concerns over its mounting operational and financial challenges.

Here are some of the highlights of the 2019 budget: 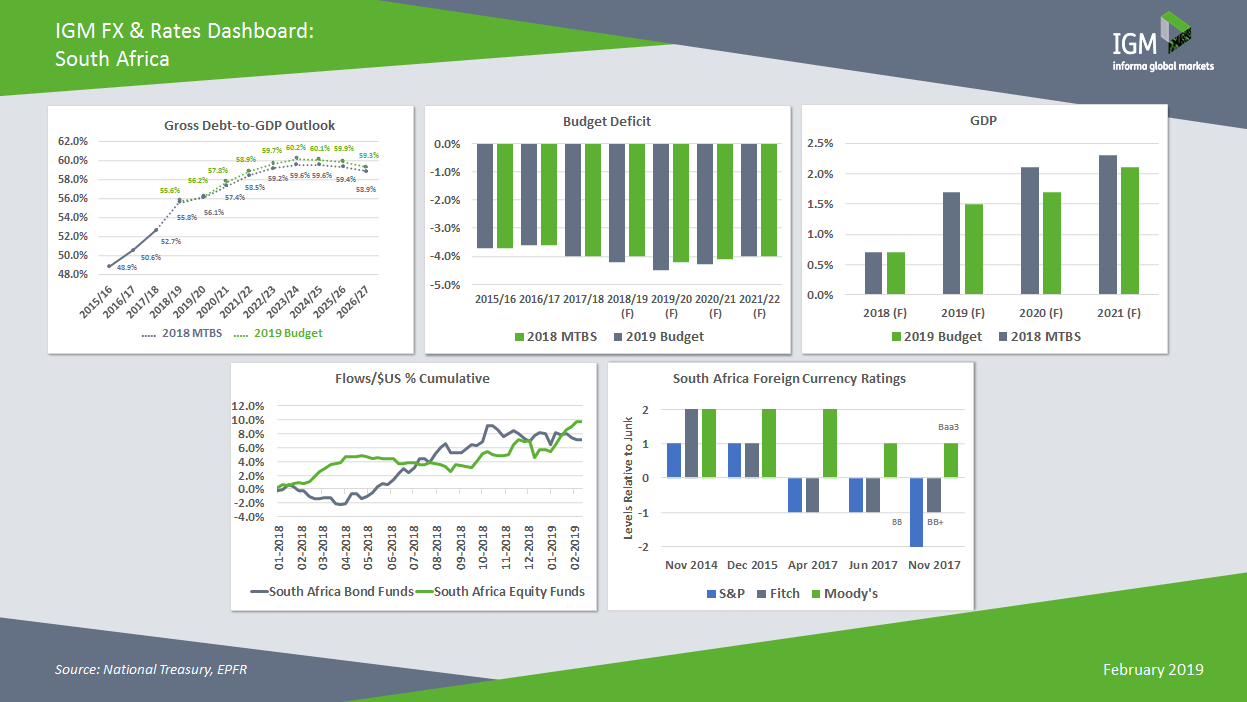 It was impossible for the government to produce a deficit-neutral bailout for Eskom, but we had previously argued that, in the absence of any major negative changes to the budget, Moody's will likely prefer to wait until after the May general elections before taking a decision on the sovereign credit rating. The budget has not changed our view for the March 29th assessment, though Moody's comments yesterday would suggest the decision is still a close call. The agency said the budget highlights the government's limited fiscal flexibility amid a challenging economic environment and specifically acknowledged the further erosion of fiscal strength. We wouldn't rule out a downgrade of the outlook to negative.

It remains to be seen if the ANC party can secure a healthy majority in the upcoming elections. If it does, this may give Ramaphosa a mandate to further pursue some measure of economic reform, otherwise Moody's may well be forced to strip South Africa of its final investment grade rating. This would, of course, see the country fall out of key indices and trigger capital outflows from passive investments that would in turn inflate the government's borrowing costs.

The net cumulative inflows into South African focused bond funds since the end of 2017 have already started to plateau after peaking at an increase of more than 9% in October last year (see the dashboard). This contrasts with equity fund flows, which have remained on an upward trajectory, in keeping with the upward trend in the FTSE/JSE Africa All Share Index, which has reached highs since early October. We suspect the advance was, albeit, in part a function of local traders making short-term gains by betting on stocks that benefited from the Rand's recent weakness.

Near-term outlook bearish for Usd/Zar, but bullish further out

In the near-term the outlook for the Rand appears a little more favourable, post-budget. However, we are no longer looking to the 13.081 support for Usd/Zar that we had flagged in our prior viewpoint, earlier this month, given the Rand sell-off that ensued into the budget.

It may well be the case that the Rand has now peaked for the year; looking further out, we are sticking to our view of a weaker Rand in H2 as it should become clearer as the year goes on the sovereign cannot escape the inevitable. 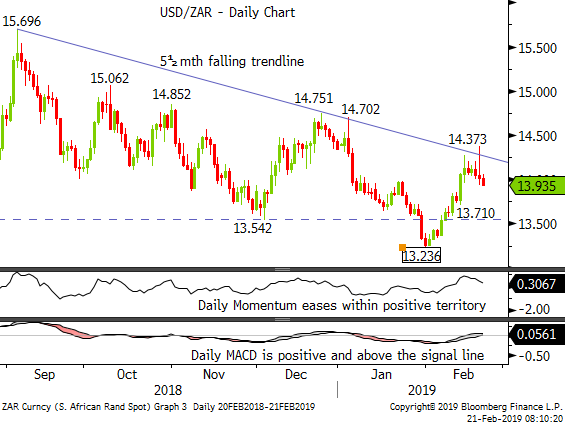