Bolsonaro a nailed on winner, but pension reform key for market rally

The Brazilian Presidential Election on 7th October produced the expected outcome and also contained a few surprises. The outcome, that Bolsonaro and Haddad would have to face each other in the run-off, was the expected result. However, the surprise came in the extent of the margin Bolsonaro had over Haddad in the first round (17 ppts) and the amount of support Bolsonaro's PSL party secured in the parliamentary elections.

Thus heading into the second-round run-off vote on the 28th October, Brazilian markets have rallied (see dashboard below), reflecting the fact that Bolsonaro is now expected to easily beat Haddad in a run-off and has stronger than expected support in Congress for his policies. In the latest Ibope poll (as of 16th October) Bolsonaro scored 59% to Haddad's 41%, an 18 ppt gap, whilst the rejection rates for the latter surged to 47% vs Bolsonaro's 35%. In Brazil, since the return to democracy, no candidate has gone on to lose the second round election after winning the first.

Why Bolsonaro is being cheered by markets and what are the risks?

Some of the fear that surrounded Bolsonaro in the lead up to the election was not just about his controversial views, but also evolved around his lack of support in Congress. This fear has now reduced after PSL's strong showing in the parliamentary elections and the overall rightward shift in the Lower House. Not only did the PSL significantly increase its seat count, but the other centre-right parties did better than expected (see dashboard above for the Congress and Senate seats). This came at the expense of the traditional left and centre-left parties and supports the notion that Bolsonaro will be able to advance his pro-business agenda through Congress. The market is also reacting to the fact that Bolsonaro is perceived to have a a strong economic team led by Paulo Guedes, a renowned economist. who intends to reform social security, privatise assets and shrink state debt.

Hence, the remaining concern is that Bolsonaro, who has shown signs he supported the 1964-1985 military dictatorship in Brazil, may undermine the democratic system in Brazil. Part of his campaign has run on a platform of liberalising gun laws and repressive tactics against urban criminality and drug trafficking, which saw gun maker Forjas Taurus become the best performing stock in Brazil during the month leading up to the election, (see graph in dashboard above).

What if Haddad closes in on the polls?

Markets would sink if the polls show Haddad posing a serious threat to Bolsonaro in the run-off on 28th October. Markets would fear further fiscal deterioration and a weak government, as he has focused his campaign on a promise to reverse austerity and boost spending to lift economic growth. Markets would also fear that Haddad, who owes much of his political success to jailed former President Lula, would repay Lula by pardoning him.

However, there may be some hope that, much like when his mentor Lula was elected as president in 2002, he will adopt some market friendly policies, and pursue a more fiscally responsible economic agenda. Haddad's supporters argue he has stuck to orthodox economic policies; as Sao Paulo mayor he kept the books balanced and secured an investment grade rating. It may be the case that he picks a pro-market Finance Minister.

A move to the middle - pension reform is key

Bolsonaro and Haddad continue to have high rejections rates (though Bolsonaro evidently less so now) and neither Haddad's party, the PT, nor Bolsonaro's PSL have majorities in Brazil's 513-seat parliament; PT commands 56 seats, while PSL have 52 seats. The lack of parliamentary majorities means that both candidates now have to turn towards the middle ground in order to broaden their appeal ahead of the second round. The two centrist parties of PP (37 seats) and the MDP (34 seats) (both centre-right) will therefore be very influential not just in terms of deciding who wins on 28th October, but also in terms of defining the post-election legislative agenda.

This is a clear positive, particularly if Bolsonaro wins, since he has explicitly supported fiscal austerity in his campaign, while the PP and MDP are known to support a much-needed reform of the pension system without which fiscal austerity in Brazil is meaningless. Pension reform is by far the most pressing issue in Brazil from an investor perspective due to the massive fiscal cost of the deficit in the public system (about 3% of GDP per year).

Both candidates have indicated that they will reform the pension system. Haddad said that the pension system needs �immediate action", while Bolsonaro said pension reform must be done, although he wants changes to the version proposed by current President Michel Temer.

There was speculation that current President Temer may offer Bolsonaro to pass the pension reform before the end of his term, i.e. this calendar year. This would be very bullish. However, Bolsonaro's wish to adopt his own policy means it is very unlikely this will happen this year.

What to expect in Usd/Brl?

We said in our first preview that after initial volatility we expected a Mexican-esque rally in Brazilian markets once the election had passed (post second round vote), regardless of who wins, and whilst this sort of still stands, it needs adjusting. This is because the election is no longer seen as a close run event, and the market has swiftly adjusted to price in a Bolsonaro victory and we would expect anything but that outcome to lead to a sharp sell-off in Brazilian markets.

Our technical chart suggests that Usd/Brl has the potential to test the 3.6197/3.6273 area if Bolsonaro is confirmed as President, but the next leg would depend on the market's assessment of any new administration's ability/appetite to pass much needed fiscal reform, including the above mentioned pension laws.

Given the uncertainties regarding the ability of Bolsonaro to deliver the much-needed fiscal adjustment in 2019, and barring any turn in Emerging Markets in general, we would expect some post-election relief profit taking to push Usd/Brl higher into year-end, with a range of 3.6450-3.8450 likely. See technical graph below; 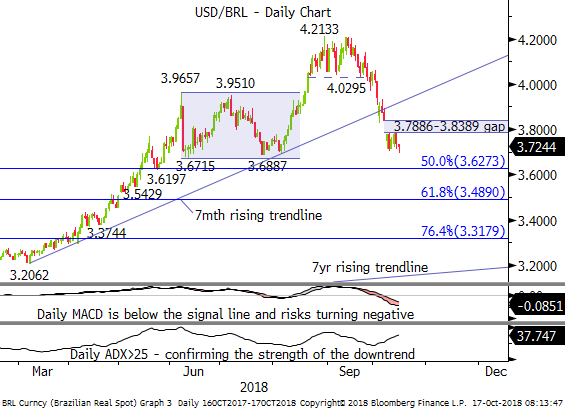 This is supported by the daily EPFR fund flows data, which shows there has yet to be any pick up in investor interest post the election, with outflows continuing (see graphs below). This was not the case in Mexico back in July, which saw flows stabilise in the month after the election. We expect that investors are waiting to see what Bolsonaro's policy agenda looks like before returning en masse to Brazilian exposed funds.

Longer-term bullish case for the Brl

The Brazilian economy has adjusted sharply over the last few years, but GDP growth is still sluggish - GDP growth is forecast by the IMF at 1.8% in 2018 and 2.5% in 2019. Thus with pension reform a no go for now, the structural budget outlook remains poor. The 12-month nominal deficit was -7.0% of GDP in July, the lowest since February 2015. However, it increased to -7.45% in August.

That said, foreign reserves are near record highs and vulnerabilities remain low, whilst external balances are healthy. Thus if Brazil can shake off the weights of fiscal policy inertia, then the Brl could rally to 3.4000/Usd in early 2019 as investors cheers the fiscal plan crafted by the likely Finance Minister, Paulo Guedes, and begin to bet on Brazil's economy emerging stronger next year.