Viewpoint: US sanctions to be more painful for Turkey than Russia

Last week we explored how the CBRT's policy inaction is pushing Turkey on the path towards greater instability and potentially rapid inflation, and whilst this is reason enough for us to remain wary of Turkish assets, continued economic mis-management could see Turkey spiral into a currency-crisis and a series of defaults. The trigger for the start of such events could come from the announcement last night that the US had hit Turkey with sanctions over the continued detainment of US Pastor Andrew Brunson over terrorism charges. This is the last thing Turkey's already-troubled economy needs.

The sanctions over Brunson is the latest flashpoint in an increasingly fraught relationship between the NATO allies, and could push Turkey further away from the West and into the arms of Iran and Russia.

In response the Lira has sunk over 3% vs the USD, 10yr local currency bond yields have surged 70bp and the Borsa 100 Index dropped 2.85% at the open, and we argue that there could be further pain to come for local Turkish markets. Usd/Try could easily take out 5.1950 and the 10-year yield could pass 18.59% (as per our earlier recommendation) if this descends into a tit-for-tat escalation of sanctions.

What the cost could be for Turkey - the case of Russia?

If Turkey does not relent on Brunson, what has become a diplomatic flashpoint could very well contribute to a much deeper economic crisis. What impact could this have on Turkey? Well we do not have to look too far in the past to assess the economic impact of sanctions, with Russia still suffering under US and EU economic penalties over the invasion of Crimea and military action in Eastern Ukraine during 2014 (Mar). Unfortunately Turkey's economy is in no shape for a battle with the US, and is in much worse shape than Russia's economy was four years ago.

However, unlike Russia, Turkey runs a huge C/A deficit and so there is even greater vulnerability to a reduction in foreign investment as it relies on capital inflows to fund the gap. This is where the picture becomes even more negative, as the EPFR fund flows data shows that net flows into Russian Equity and Bond Funds turned negative ahead of the imposition of sanctions and continued along this path for a further two years.

Turkish CB data already shows that since February, foreign portfolio investors have withdrawn a net USD4.7bn from Turkish markets, the bulk from debt securities. At the same time the CBRT's C/A data shows that the deficit has swollen to USD57.2bn on a 12-mth rolling basis (as of Jul-2018), (see graph below) Why Turkey may not back down?

Turkey has said it will retaliate against the US in the same way and without delays, signalling that Ankara will not back down in an escalating dispute over the detained American pastor. Unless Trump uses rhetoric to deescalate, we are not confident that the Turkish President will back down, as Erdogan sees a fight with the US as enhancing his �global" standing, at least amid activist Islamists. Much like Putin managed during the fallout from the sanctions Erdogan can deflect the blame for Turkey's economic woes away from his own policies, on to external influences, vindicating his rhetoric on 'foreign enemies' trying to destroy the economy.

Because of this we see potential for further downside risks to Turkish markets, and focusing on Usd/Try, expect that the pair could extend the upside to 5.1954 in the near term. 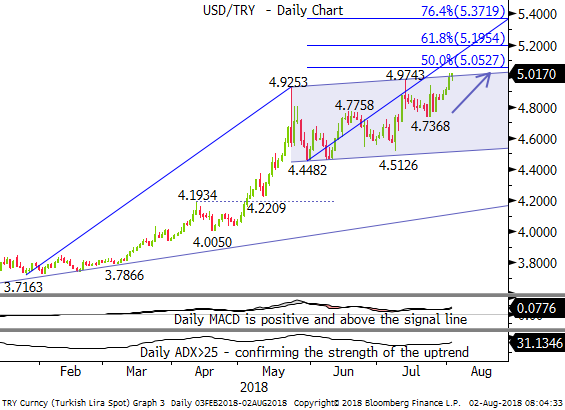