-A touch of Fed speak ahead of PCE inflation that is seen above target.

-Japan Tokyo CPI to quicken at corer and core-core levels?

-ECB and BoE speakers include Praet and Carney/Haldane.

End of month, end of quarter and end of H1 � and the synchronized global economic growth story is a phenomenon of the past � unless that is the 'soft patch' really is a patch. Evidence suggests it is more nefarious, although this is not to say a recession is around the corner. The CRB Raw Industrial Materials Index, for some an indicator of global economic growth, has recently suffered a sharp fall as trade tensions ratchet up again, is down on the quarter, but a touch higher year-to-date.

There is also an EU SUMMIT (Thursday-Friday). For once, there are several issues that markets should care about. One is migration, a topic that has caused the need for an emergency summit to be attended by 10 EU nations this weekend (Sunday). This issue is creating more than a little tension within the GERMAN Coalition, which is due to meet (Tuesday) to discuss this and probably the common EMU Budget Merkel and Macron discussed earlier in the week. Merkel's Coalition partner the CSU isn't especially happy about what was allegedly agreed here this either (see this Times article for more).

Why should markets care? Long-term econ growth is driven by population and productivity growth. With the baby boom generation going into retirement and presumably wanting all those (unfunded pensions), there needs to be economic growth. If barriers to migration are in place to the extent that causes working population to shrink � then either baby boomers will need to put off retirement (would you with a 'healthy' pension in-waiting?) or productivity growth will have to drastically improve. These used to be trends to worry about for the distant future � this particular future is arriving.

A second issue to watch is progress towards an Banking Union in which there is desired some way to prevent the self-reinforcing 'bank-sovereign doom-loop' from taking grip in a crisis and by its nature making the crisis much worse (see a recent VOX piece HERE on this topic). As the graphic below shows, Euro Area bank equities have had a pretty torrid 10-years for a variety of reasons.

Also on the agenda, more fiscal integration and more powerful macro-stabilisation tools (e.g. the talked about European Monetary Fund). This runs into objections from those who think financial markets should be the disciplinarian and fear wealthier nations will end up footing the bill for 'profligate' nations.

Political concerns (Italy again, PM might not go to this weekend's emergency summit, which hardly presents a unified front) and slowing economic growth do not add up to EURO positives and the 2017 Euro appreciation may also have found its way through to negatively impact. 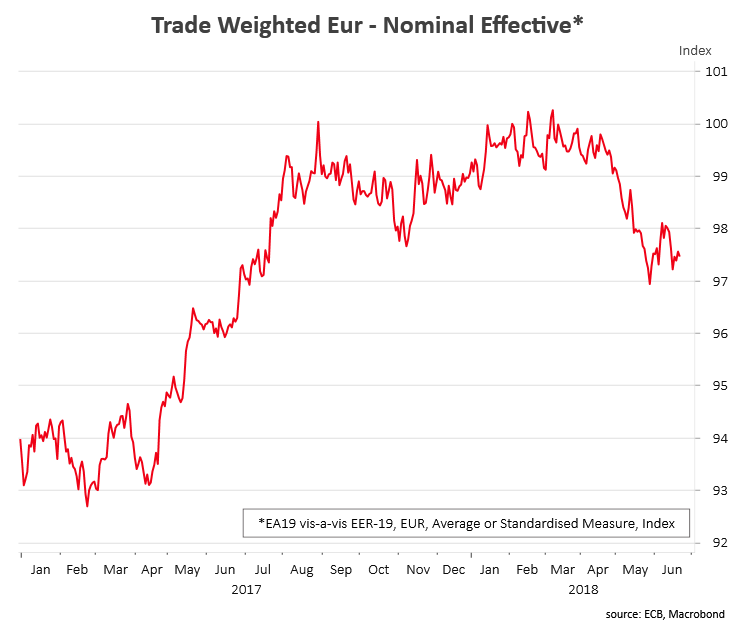 A weight continues to be equity outflows.

All of which should keep BUNDs bid over short-term at least.

And then there is BREXIT. Possibly the most significant development is the story that Airbus (which employs 14,000 across the UK plus supply chain implications) is threatening to 'reconsider its investments in the UK, and its long-term footprint in the country'. in the event of a no-deal. This is by far the largest and strongest warning yet of the potential implications of leaving the EU and is also a call for clarity on the British government position/plan.

It will be interesting to hear whether the Airbus musings will be echoed by more multi-national large employer corporates. A clear inference is the impact on investment in the UK economy and this is something the BoE will take notice of, despite this week's surprise 6-3 vote (as opposed to 7-2) which has lifted GBP. Note, Haldane (who changed to a hike) speaks (Thursday) after fellow and outgoing hawk McCafferty (Tuesday) the same day as the MPC newbie, Haskel, appears before the TSC. Latter's views have obvious inference. Chief Carney also talks about the Financial Stability Report (Wednesday) � which is likely to mention Brexit. The new �500bn fund (see HERE for more) might get a mention somewhere along the line.

And this brings us onto TRADE FRICTIONS. The FED and ECB chiefs made note that trade concerns are beginning to make corporate CEOs reduce investment plans � something to watch going forward. There is an underlying point to make here. Trade issues are more US versus The Rest. Hence, trade between nations outside the US goes on without interruption. Possibly why despite all the trade talk, growth equities in the MSCI World has had a decent Q2 �

� until examination of the constituents reveals the top weightings are (see HERE) � Apple, Amazon, Microsoft, Facebook, Alphabet � and it is the FAANG stocks that are a not insignificant global equity driving force. The MSCI World is flat year-to-date. Momentum equities (also FAANGS) have had a decent year � value not so good. The Emerging Market Index (plenty of export-led economies represented here) has also suffered.

In theory, products with a tariff slapped on should be substituted for those (cheaper) that are tariff free � in practice this is more difficult and takes time � but the aforementioned investment angle is a worry for economic growth if it becomes a trend. And this will have implications for the FOMC's current policy path. Another point is that the sort of inflation which tariffs bring is not the sort an economy wants � and one wonders how the Fed will treat this.

None of this seems to negatively impact the Dollar though which remains rampant. SocGen also suggest that the Usd is starting to re-couple with 10-year TIPs.

Real yields should rise if real economic growth accelerates. In the process, higher real yields act to tighten financial conditions. Breakeven rates are not rising which suggests the market is at least confident in near-term US economic growth and the so-called 'Goldilocks' scenario. Although 80bp real yields in historical terms is nothing to get overly excited about (pre-crisis range 2-4%) and therefore isn't likely to influence the Fed Funds path yet. Still, speeches from Bostic and Kaplan (Tuesday), Rosengren (Wednesday) and Bullard/Bostic (Thursday) will all garner interest.

From the ECB, the seemingly 'hawkish' Nowotny (Monday) and Hansson (Tuesday) plus the pragmatically perceived Praet (Wednesday) all speak ahead of the ECB Economic Bulletin (Thursday). One of the interesting points raised this week is whether or not Draghi will 'regret' his forward guidance not to raise rates until 'at least the Summer of 2019'. As yet, no kickback from the markets and post-meeting pricing for the first 10bp of Depo Rate tightening is still end-2019. Never a man to miss a chance to sound dovish, the ECB chief has already said QE could be reinstated � all of which leaves the GERMAN FRONT-END yield under the Depo Rate.

The only rate decision comes from the RBNZ (Wednesday). This is the most neutral developed market central bank. The KIWI has suffered in line with other FX versus the Usd (see HERE for Technical Analysis).

In contrast, the most aggressive CB aside from the Fed, the BoC presents its Q2 Senior Loan Officer Survey and Business Outlook (Friday). The latter's last outturn noted:

�Results of the spring Business Outlook Survey suggest that business sentiment continues to be positive, supported by healthy sales prospects,�

That said, in the interim, trade tensions have become more intense with the CAD taking quite a hit.

A poor outlook might be enough to price out a July rate hike. July CAD OIS prices 1.42%. Governor Poloz speaks earlier in the week (Wednesday).

Also note the Summary of Opinions to the most recent BoJ (Monday). The inflation outlook downgrade sums it all up.

The data calendar has a little more when it comes to top tier stuff.

The US highlight is the May PCE (Friday) with personal spending/income and the savings. The headline is expected to accelerate to 2.2% y/y and the core too 1.9%. So, mandate hit, symmetry and what might be considered as too hot an economy will get an airing. Key though should be durability. Remember, the Fed is trying to cap inflation. 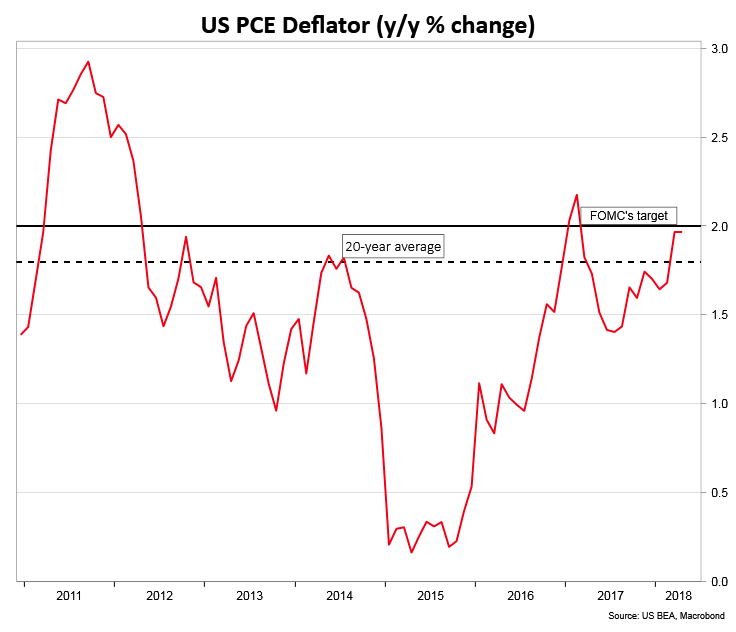 Income and spending should maintain reasonable growth rates. Last time the savings rate fell back under 3% � itself a poor level. Meanwhile, consumer confidence (Tuesday) is expected to remain close to very peaky levels.

Core-durable goods shipments bounced back in April at +0.9% m/m taking the 3-month annualised rate to 4.5%. May's report is due (Wednesday). 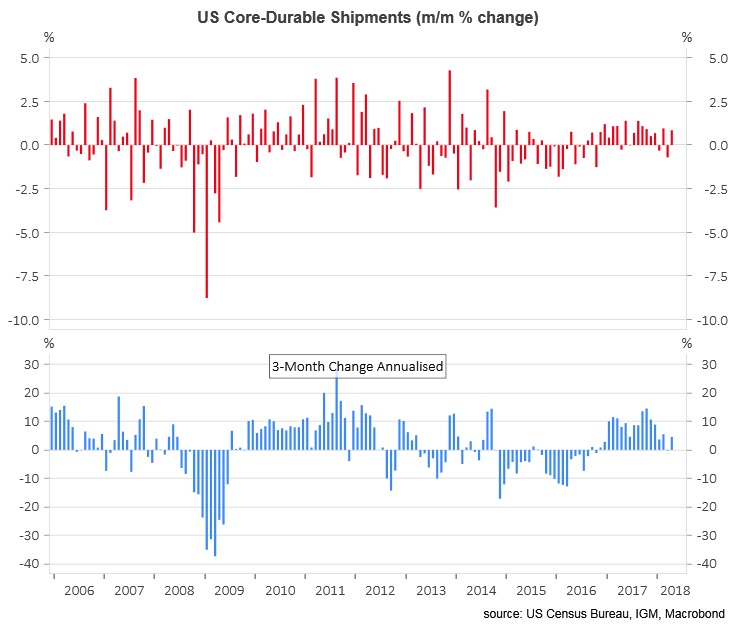 JAPAN's labour market numbers (Friday) will continue the 'tight' jobs market theme. Of more interest will be May preliminary industrial production that' is forecast to contract 1% m/m, wiping out April's 0.5% expansion. 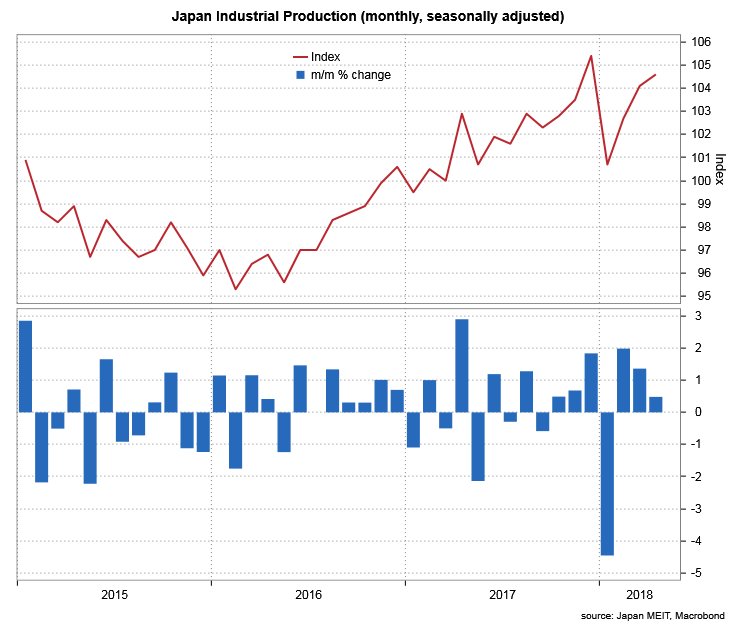 June Tokyo CPI (also Friday), a precursor for the economy-wide inflation outturn, is expected to accelerate at the core and core-core levels � but is not going to threaten the BoJ's recent inflation outlook downgrade. Retail sales (Thursday) are seen falling m/m.

June CPI is the EUROZONE highlight (Friday). And, wait for it, is expected hit 2% y/y (which is actually above mandate!). As with the US, durability is crucial � and aforementioned dovish Draghi remarks suggest this it might be a repeat of early 2017. Italy remains a laggard.

Individual nation reads appear for GERMANY, ITALY and SPAIN (Thursday) and FRANCE (Friday). May PPI for Spain (Monday), Italy (Tuesday) and France (Friday) add to the picture. Linked, EMU M3 money supply (Wednesday), which has been disappointing of late � 3.9% y/y well below the reference rate � and will become a concern if it is deemed to contribute to slower economic growth.

The German Ifo for May (Monday) is of interest for impact of � economic slowdown, political issues and trade tariff influence. The headline is expected to fall a touch. German consumer confidence isn't expected to suffer much (Thursday) � partly because the labour market remains so strong (June number due Friday).

Also lookout for Spanish May retail sales (Thursday). A significant contributor to economic growth has been slowing of late. 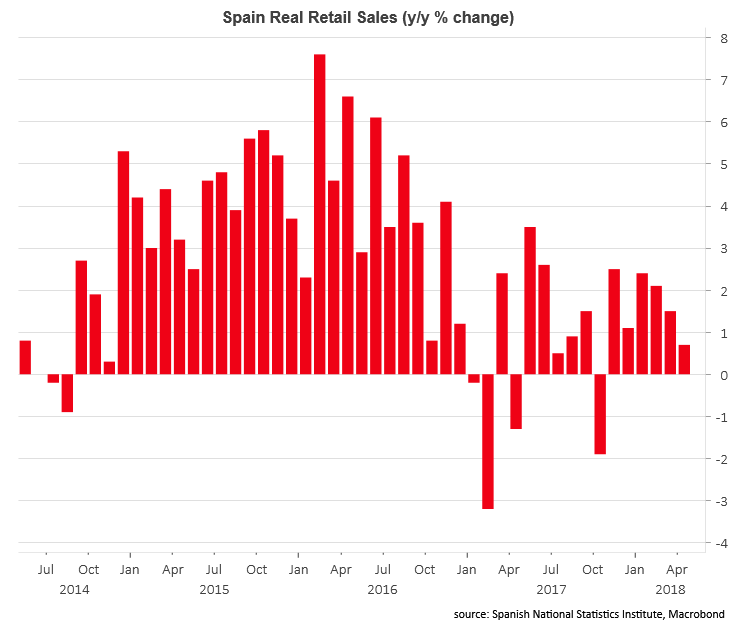 Money supply figures (for May, Friday) are a UK highlight. Credit flow to the economy has slowed recently, a worry in more than a few quarters. 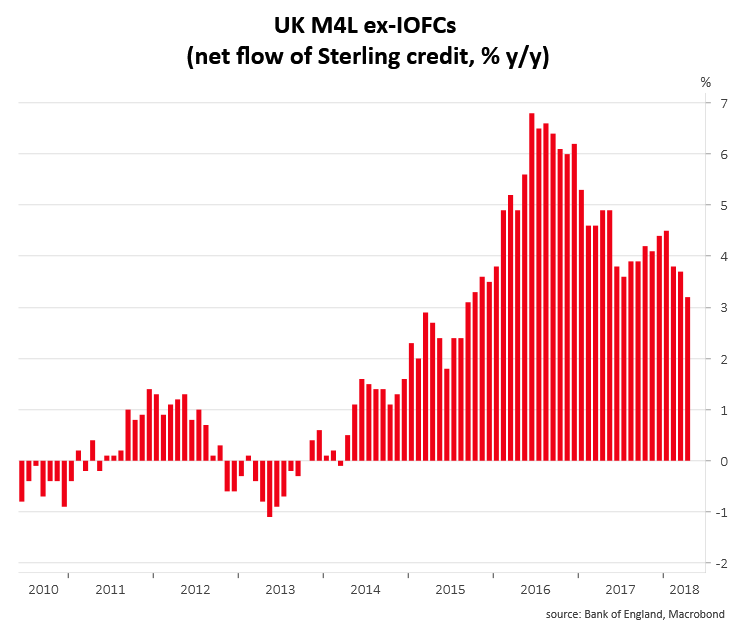 May PPI is a SWEDISH focus (Tuesday) ahead of retail sales (Thursday) and household lending (Friday). The former has accelerated significantly in recent months. Retails sales are seen expanding 0.2% m/m a 3rd consecutive positive read. NORWEGIAN retail sales are also expected to expand in May, at a slower rate though.

CANADIAN GDP expanded at a decent m/m rate in both February and March. April's outturn (Friday) is a crucial input for the next BoC (July 11).