-Powell, Williams and Bostic all speak.

-Housing starts the pick of US data.

-Japan CPI expected to arrest slowdown � aside from core-core.

-Draghi speaks a lot � Carney just the once.

-EMU provision PMIs to indicate a Q1 'soft-patch' is morphing into a H1 soft-patch.

Last year's Sintra Forum was a tad more 'explosive' than the ECB President may have wished. The 2018 conflab (Monday-Wednesday) occurs less than a week after the central bank fireworks from the ECB and FED. The working title is 'Price and Wage-Setting in Advanced Economies'. The full agenda is HERE. After Draghi's opening speech (Monday), the pick of all the talk is the Draghi, Powell, Kuroda (BoJ), Lowe (RBA) Policy Panel (Thursday). Praet, Lane, Coeure and Bullard are also in the mix with a decent bunch of non-CB names too.

So, the stage is set for the great withdrawal of CB liquidity later this year (with BoJ in 'stealth-tapering). Morgan Stanley's Hans Redeker notes:

'First, tighter liquidity conditions should lead to a de-correlation of asset performance and volatility divergence before risk markets finally fall universally. A summer of decorrelation may be ahead of us, with risk-sensitive asset classes offering only limited corrective upside potential. Universal JPY strength should be the result.'

Yield differentials are firmly in the Dollar's favour and against the Euro - which has implications for EM FX too (see HERE for a USD/JPY comment with Technical Analysis). Within this,

SocGen suggest there is a disconnect between the positivity of the Fed's statement and lack of conviction in 'the Dots' (so, this could go more Dollar positive?) Two new FOMC appointees join later this year. Clarida is expected to lean towards the hawkish side. And specific to the EURO, Deutsche think Italy and trade fears will be a drag on the single currency over the Summer and the best way to view this is via equity flow. The huge EMU current account surplus offsets to a degree (April read due Tuesday). For the Euro Area, the Q1 'soft-patch' now risks becoming a H1 soft-patch as the real US economy, in the words of BMO's Ian Lyngen, is heading towards 'near-epic strength' in Q2. 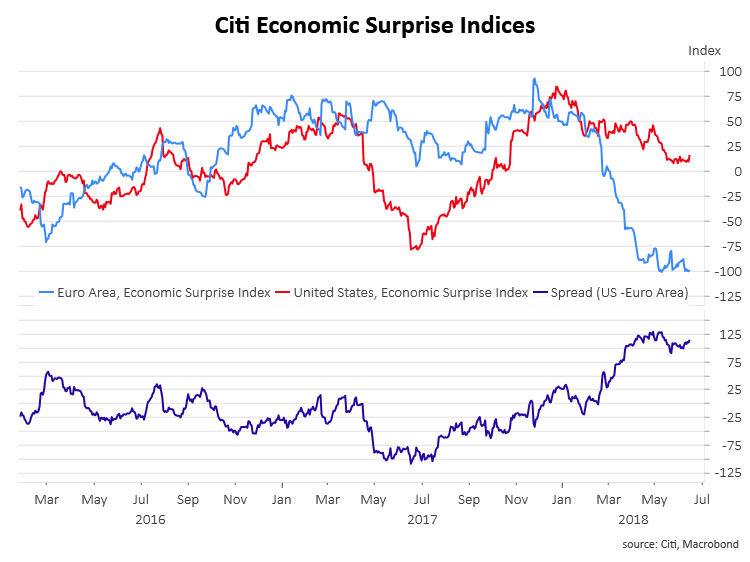 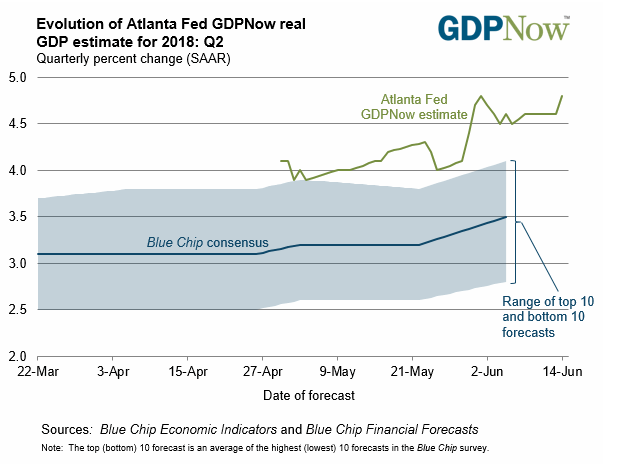 There is though plenty of bearish Euro, positive Dollar talk doing the rounds. As the dust settles on the ECB/Fed � the market has pushed out expectations for a first ECB hike to the back-end of 2019 (when Draghi will no longer be Chief). Still, an interesting point made by Nowotny � he feels the ECB has 'achieved' its inflation goal. Close to but under 2% is not, by the way, symmetrical and we'll note again that it is lunacy to expect a central bank to hit its target with unerring accuracy month after month. Nowotny (who was speaking with this Austrian CB hat on and does so again Wednesday) is clearly in the 'hawkish' camp. One doesn't have to be a rocket scientist to see that there is a split on the ECB's GC, which is not surprising given the juncture the bank is clearly at. Villeroy (Wednesday) and Weidmann (Friday) speak. One for the future rather than next week, given ECB rates policy is purportedly data dependent, there will be great interest in ECBer interpretation of economic developments and whether expectations of the first hike will be brought forward.

On the Euro Area political front, the GERMAN Chancellor meets her ITALIAN counterpart (Monday). The topic of immigration looms large. Ms Merkel seems to disagree with her sister party (who want less immigration) whilst the views of the new Italian government are much more unified. Merkel also meets her FRENCH peer a day later � EU reform on the agenda? The EUROGROUP/ECOFIN gather (Thursday/Friday). All this ahead of the following week's EU Summit where 'progress' on Brexit and the Euro Area Banking Union will be up for discussion � probably immigration which is linked to Brexit as well � and trade tariffs.

Meanwhile, the Fed chief may have been clearer than his predecessors, but still, the question of where equilibrium funds rests is up in the air. A market view is the Usd OIS 1y1m rate which is just above 2.6%.

There is a suggestion that financial stability concerns might prompt the Fed to tighten beyond equilibrium funds (see HERE for something we wrote) and a student of so-called r-star, Williams orates (Monday) along with Dudley and Bostic. The latter recently suggested it is the Fed's job to prevent curve inversion. If that is true, the FOMC is going about an interesting way to prevent. Although there an intriguing suggestion from OMFIF (HERE) of another Operation Twist to raise long-rates and that would tighten financial conditions for households. There is also a good deal of talk regarding the IOER and implications for the volume of reserves and QT/eventual size of the balance sheet (including an 'early' end to the balance sheet runoff).

Elsewhere, after the ECB, the SNB (Chf still 'too strong' � see HERE for Usd/Chf Technical Analysis - and inflation too low), NORGES BANK (September rate hike still in play) and BoE (some clarity would be nice!) all gather (Thursday). None are expected to change policy. BoE chief, Carney, has his Mansion House speech the same day. Brexit uncertainty/weak government continues to buffer GBP as do rate hike expectations (see HERE for something we wrote). GBP OIS currently favours a 25bp Bank Rate hike by year-end (Jan19 1-month OIS at 68.5bp), but this market has been volatile. More politics next week as the Brexit Bill goes back to the Lords (Tuesday). The toing and froing isn't doing anybody any favours and continues to undermine the UK government.

OPEC/NOPEC (Friday) is a major talking point. The objective of the production pact has been met. 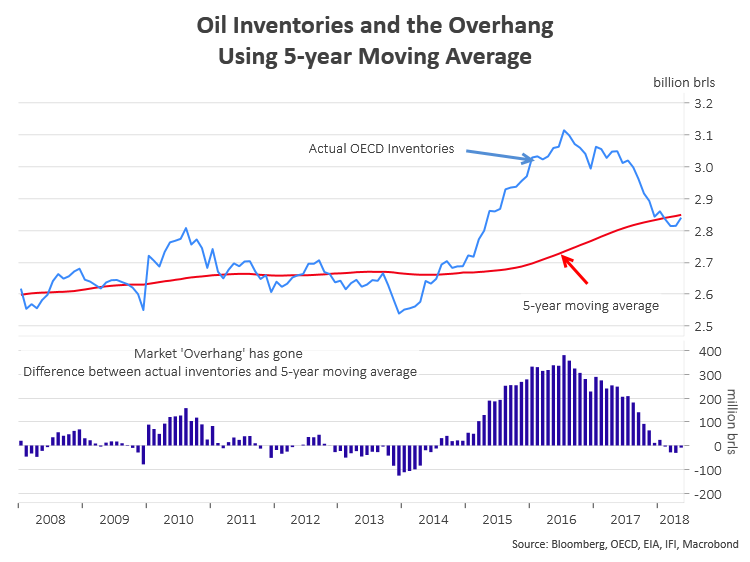 There seem to be one of several ways to go:

2.Leave the agreement as is, but Saudi/Russia increase output anyway (mildly price bearish).

3.Leave agreement as is and those signatories who can increase output within the agreement bands do so (priced-in?).

On the data front � the US highlight is probably May starts/permits (Tuesday). Both continue to trend higher although starts risk plateauing, although the graph below suggests a significant fall in the 12-month moving average is the sign of impending recession � we are nowhere near this as yet. 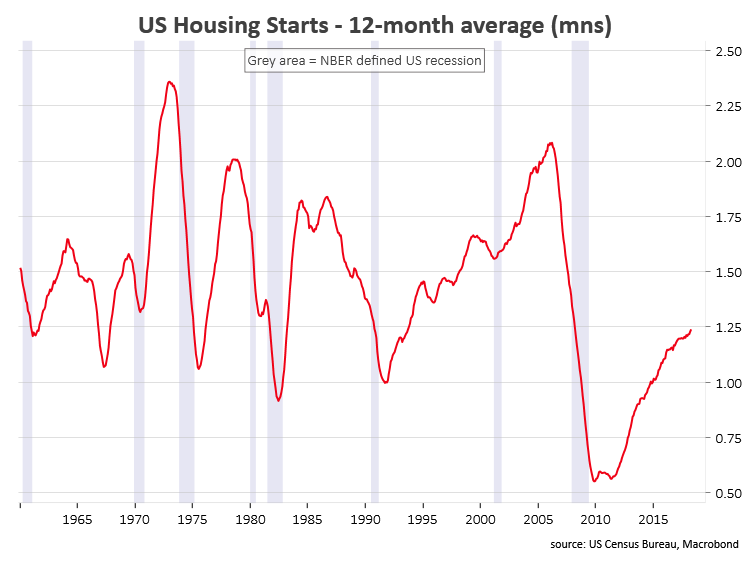 The June NAHB (Monday) and existing sales (Wednesday) add to the picture. The Q1 current account deficit (Wednesday) is interesting for what it pertains to the Dollar. The June Philly Fed (Thursday) should indicate decent confidence. Note preliminary June Markit PMIs (Friday).

May CPI (Friday) is the JAPANESE focus. 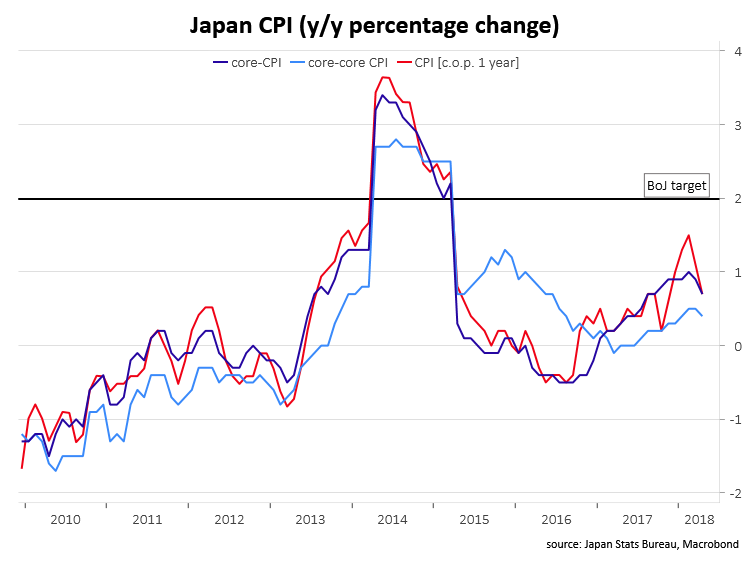 The forecast is for the inflation slowdown to arrest aside from the core-core that is seen even slower. May trade (Monday) is expected to reveal slower export growth and faster import growth. Export volumes are just about trending higher. 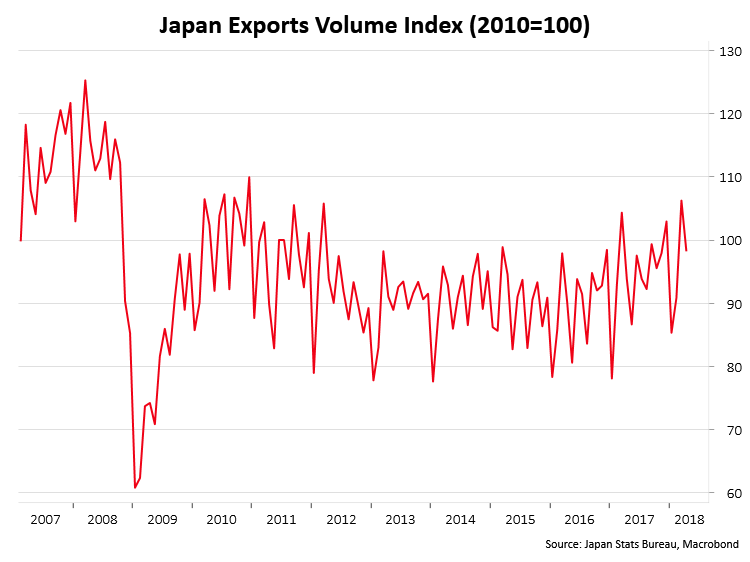 EUROZONE preliminary June PMIs (Friday) will be viewed within the prism of a H1 'soft-patch'. Projections suggest this will be the case. May GERMAN PPI (Wednesday) is the only other data of note. The y/y is expected to accelerate to 2.5% y/y. 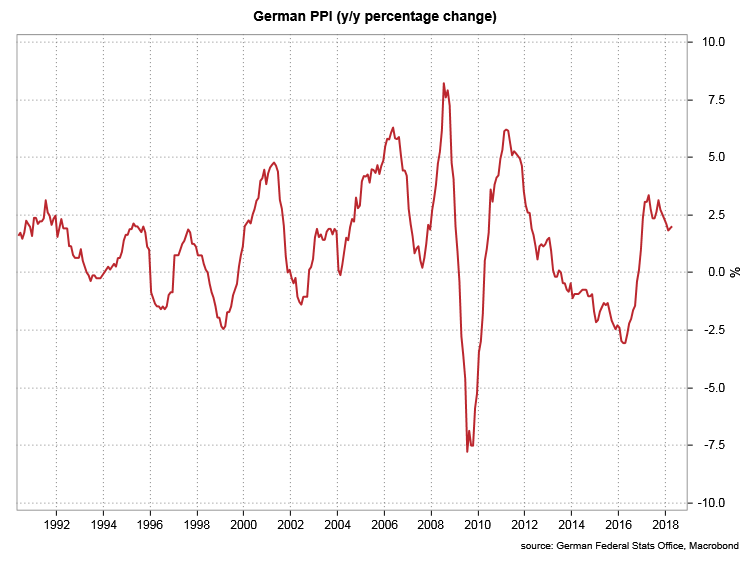 The UK produces just the Rightmove June HPI (Monday) and public sector finances (Thursday). The latter are being viewed favourably at present with a 'day-to-day' surplus inducing calls for austerity to end � but the Government doesn't seem in the mood to loosen the purse strings just yet.

Elsewhere in Europe; little to whet the appetite with just SWEDISH May unemployment (Tuesday) and the June economic tendency survey a day later.

CANADIAN inflation has spent a few months above 2% y/y. The May read is due (Friday), another around target outturn will reinforce the BoC's stance and maybe the market's view of a July rate hike. Note April retail sales the same day. 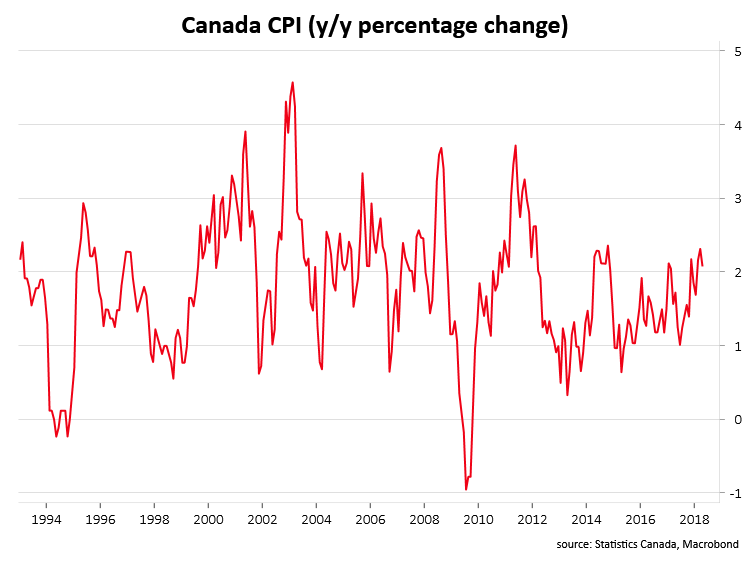 GDP is expected to show that the NEW ZEALAND economy slowed over Q1. May credit card spending (Friday) provides a window into consumer outlays.