Viewpoint: Flash crash and what transpired in sentiment after the 2010/15 iterations

The global equity sell-off has intensified significantly, with a hugely bearish move yest.

The initial sell-off was linked to leveraged selling in ETFs (which prompted proportionate adjustments in their underlying holdings) and from mutual fund unwinding.

What transpired in the US afternoon appears to be a spate of selling from algo funds in stock index futures (on the sell signal generated by the break below key tech supports) which begot more algo selling which then manifested into automated risk control systems (of which many are still based around variations/iterations of the flawed VAR model) somewhat indiscriminately cutting positions in a bid to limit portfolio losses.

That ultimately led to an abrupt/sharp withdrawal of liquidity during that 15/20min period, which prompted even more systemic de-risking as prices cratered in what is a self-fulfilling cycle.

Given how most trade books held by funds are generically similar by way of holdings and governed by largely the same risk control parameters, the indiscriminate selling and the abrupt withdrawal of liquidity was in a way the perfect storm of which we have seen previously (equity flash crashes in 06 May 2010, 24 Aug 2015, 23 Apr 2013 was technically a flash crash but it was down to an erroneous/hacked tweet, FX flash crash on 18 Mar 2015).

What happened after the 2010/15 flash crashes

While it's unlikely we will see another sell-off of similar magnitude from here, equity sentiment is invariably cautious/soft with US bourses now having erased their YTD gains.

While global econ data has remained strong which should invoke dip-buying support, we suspect there is still a bigger inclination to de-risk portfolios amidst questions over CB policies/bond market moves and the impact these could have on valuation (NPV would invariably fall on higher interest rates), the equity/bond yield premium (which on Fri narrowed to the smallest in 8yrs for the US) and corporate borrowing costs (and hence earnings).

This postulation also finds some supportive argument when we look back at the past flash crashes. 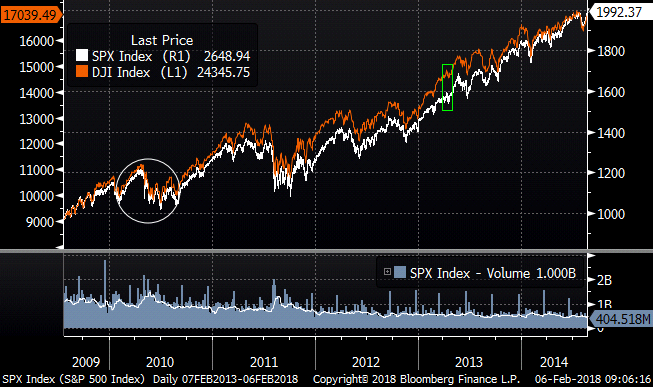 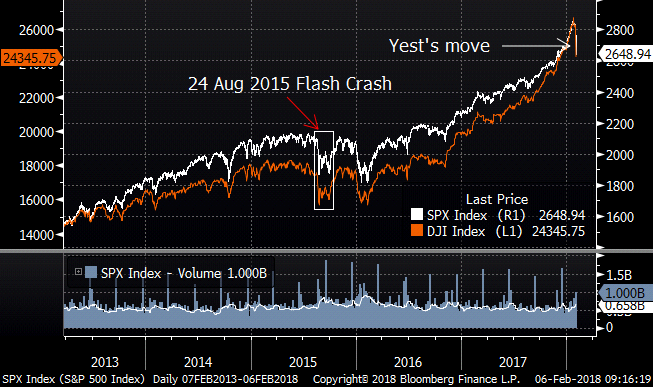 Yest's slump was in many ways similar to the ones in May 2010 and in Aug 2015, where selling in prior days culminated in the algo/risk control/liquidity withdrawal storm. 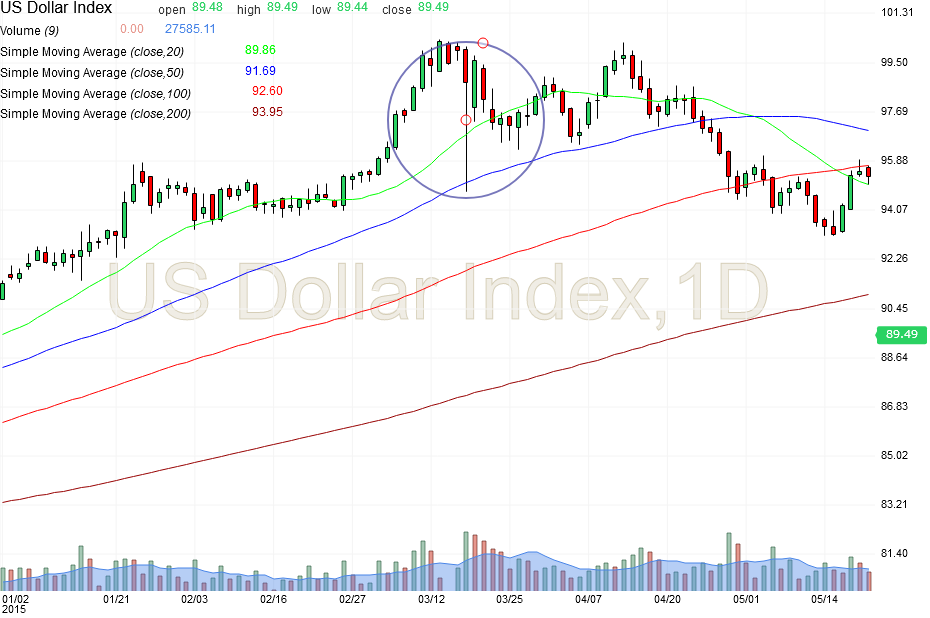 Flash crashes have previously been a reversal point in sentiment

Past performance is never fully indicative of future performance, but what the 2010/2015 flash crashes show is that they were a turning point in previously bullish sentiment and that the sentiment reversal lingered on.

Could this play out again?

Whilst the current econ dynamic is a whole lot better than in 2010 (and only if econ data starts to turn down will the risk of a bear market need to be priced in), sentiment is a fragile thing and there are momentum swings within it.

As such, there may be a case that risk sentiment will stay depressed for a while longer and that this equity/commodity/FX correction may continue. JH