Despite all the market bravado calling the end of the bond bull market after 10yr UST yields popped above the 2.390-400% resistance zone last wk, we theorized that the yield pop was likely a fake-out that could quickly reverse.

Our postulation is being tested at present, albeit in an affirmative manner.

There were 3 subsequent kickers though, firstly on reports that President Trump is favouring the more dovish Powell for Fed Chair, scepticism over US tax reform, and concerns stoked by a CNN report that a Fed grand jury approved the first charges in the Russia collusion investigation and that US special counsel Mueller is poised to make the first indictment today.

So why our scepticism about last wk's UST yield rally?

US tax reform battle is only starting, the odds point to a watered down version that ultimately expires in 10yrs

We have long stressed that one should not get too carried away by US tax reform talk.

Let's look at the big picture.

Even more damning is that after a protracted battle, the ultimate tax reform plan will likely be watered down.

Last but not least, the big kicker comes from the fact that if the tax reform plan ends up being watered down and crucially budget negative, it will expire in 10yrs given the provision within the "budget reconciliation" procedural legislation which effectively makes it merely a stop-gap measure.

Trump's other big election promise was a $1 trln infrastructure spending plan. This has largely evaporated into thin air.

Trump's pledge has been to lift the US long-run growth rate above 3%.

The issue here is that if the US tax reform plan is watered down and effectively a 10yr stop-gap, while there isn't even the s/t prop of infrastructure spending, the theoretical growth potential for the US isn't likely to sustainably push above 3% judging by the anecdotal evidence over the past few yrs.

Even the argument that a slightly deficit negative tax plan can be acceptable on the basis that it could spur sustained growth is flawed given the Treasury Department's "unrealistic" projections.

Hawkish Fed? The balance of risk favours being sceptics

The market has also been overly fixated on Fed Chair speculation, with rates traders pushing up yields on speculation of a hawkish change (initially Warsh, subsequently Taylor).

We have previously harboured scepticism and suggested that one takes a step back and look at the bigger picture. See here, and here for our previous Focus Comments.

Talk about a hawkish Taylor and how his Taylor rule would effectively call for a neutral rate of 3.75% has made the rounds, but if tax reforms don't pass or gets watered down while there's no infrastructure spending prop which leaves the US long-run growth potential below 3%, the Taylor rule may not actually call for a steeper tightening path than what the current Fed is predicting, especially if the backdrop of subdued inflation persists.

The whole notion of an aggressively hawkish Fed also flies in the face of Trump's preference for low rates and a weak USD.

The latest market rumour is that Trump is leaning towards current Fed Gov Powell for the next Chair, underpinned by support from Treasury Sec Mnuchin.

From a market perspective, the prevailing argument would be to price in a policy mistake

Let's look at it from the angle of rates. If the Fed were to really be that hawkish amidst a backdrop of subdued inflation/wages (amidst the tech disruptions) and no discernible lift to l/t growth potential, the bigger market bias would instead be to price in a policy mistake.

As it is, the market is already sceptical about the Fed's current l/t rate projections (let alone the 3.75% neutral rate adjudged by the Taylor rule) and it's hard to see back-end UST yields rallying at this stage and it's more likely that we will continue to see a market bias towards yield curve flattening.

Incidentally, if excessive Fed tightening under Taylor becomes a potential trigger for a US recession, it could spark an even more pronounced flattening of the yield curve than under Yellen/Powell, possibly even to the point of inversion.

Note that EGB back-end yields will be hard-pressed to rally in the near to mid-term given the ECB's caution towards tapering and effectively signalling that QE remains open-ended for now.

We would also highlight how Japanese real-money names (pension funds, lifers) have recently communicated that they are intending to use fresh funds coming in over the next 6mths to buy foreign sovereign debt especially in the back-end.

This is a big factor that many calling for a bear market for bonds have not yet considered.

Last but not least, the Trump-Russia collusion saga may only be starting

The Trump-Russia collusion saga trail has gone cold over the past few mths. That said, it may be about to come back with a vengeance.

Who will it be? What are the implications for Trump?

He hasn't taken it lying down, with a flurry of Tweets to denounce it as a Democrat "witch hunt" coinciding with his tax cut push.

The key implication here is that Trump gets distracted from tax reform, or that any backlash would harden the resolve of conservative Republicans to vote against it.

Taking all the above into consideration, it's hard to argue against a bias for yield curve flattening.

In particular, we retain the view that the 10yr pop above 2.390-400% is likely a fake-out that catches bears out yet again, mirroring what was seen in May and early Jul. 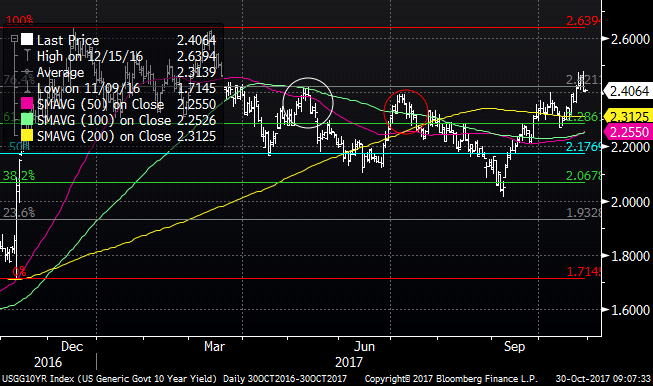 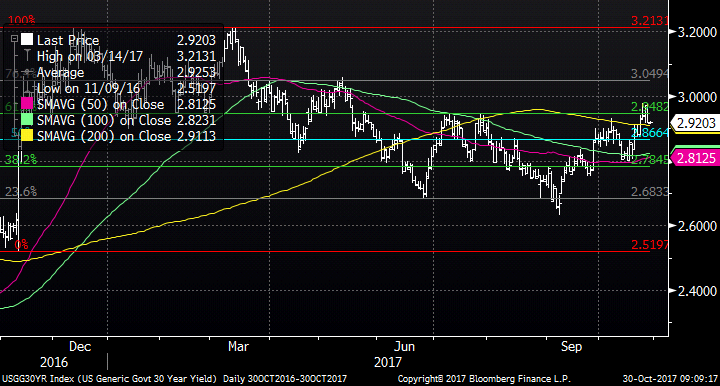 USD may face interim pullback but set to diverge from yields, still intrinsically tied to Euro

Note that we postulated post-NFP early this mth that a profit-taking move down towards 93.00/92.89 could pan out but that support should be found around there, with the break below it's uptrend channel to be taken in the context of a downside overshoot (fake-out) of it's uptrend channel that briefly gives USD bears some hope, before a short-squeeze attempt towards 95.00 kicks in.

In truth, the USD may see an interim pull-back on the back of any slide in UST yields and with the USD Index having closed the topside gap to 95.00.

At this stage, it's pushed back into the previous uptrend channel that was invalidated post-NFP. We suspect it will struggle to hold above the channel support and could retrace back down towards 94.35/30 before staging a fresh rally towards 95.17 and 95.83.

At the crux of the matter, we still expect the USD's fortunes to remain intrinsically tied to the Euro (in a direct reversal of what transpired in late Jun to early Sep) and this dynamic is the one that we ultimately think will matter and allow the USD to diverge from UST yields. JH 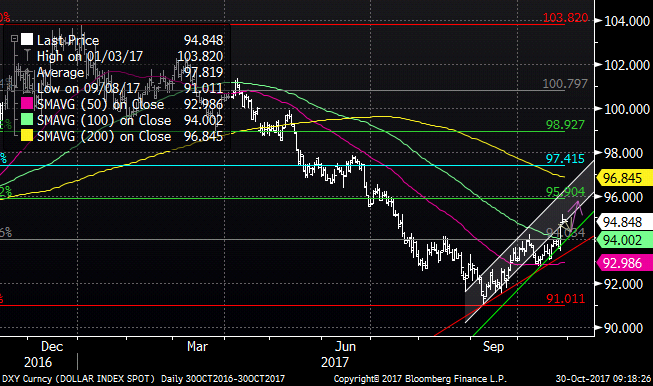