CEEMEA Primary Issuance sets all sorts of records in H1

As expected, the June FOMC had no significant bearing on CEEMEA primary activity amid the general feeling that Fed rate normalisation remains gradual. Over the month, 24 deals hit the screens for a combined total of USD16.5bn, the former up slightly from the 21 deals in May. This was in fact the best June for primary issuance (in terms of the number of deals and issuance amount) since 2014 and thus, rounded out the first six months of 2017 on a robust note.

In total, there were 151 deals out of the region in H1, raking in a whopping USD121.1bn � a record on both counts according to our reports (dating back to 1996) � the latter is some USD25bn more than the next biggest issuance volume recorded in H1 2013, as shown in the graph below. 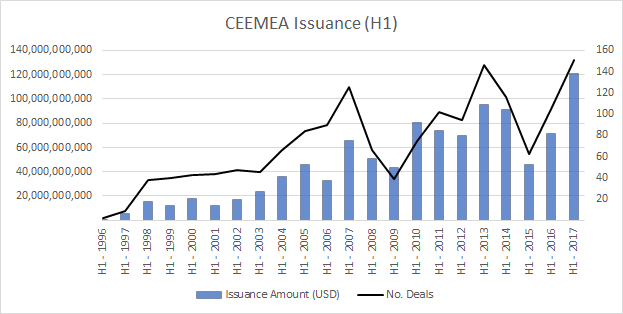 A breakdown of this issuance reveals a few standout areas in H1, which is all testament to the supportive environment, particularly in USDs.

Russia: Best H1 in terms of number of deals and amount issued since 2013. 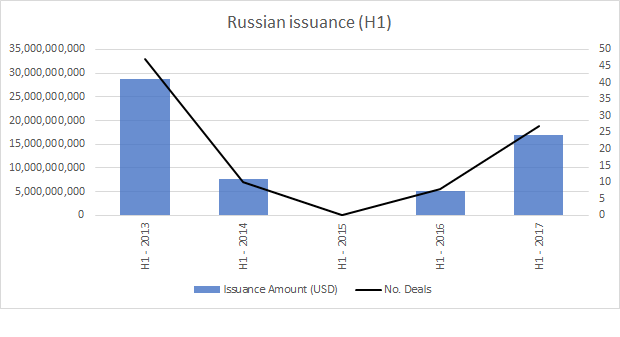 A total of 27 deals came out of Russia in the first 6 months of the year for a combined total of USD17.04bn, and across a variety of denominations � USD, RUB, GBP and CNY. Corporates carried the weight, with the sovereign hitting the market just once, in late June for USD3bn, but nevertheless, providing a victory over restrictive geopolitics. Demand for this issue topped USD6bn as the high yields offered by Moscow eclipsed political risks.

What's more, Russian institutions sold the highest amount of new debt in H1 since the country was hit with international sanctions three years ago, further demonstrating that foreign investors remain hungry for Russian paper even as they cool on the country's equities. 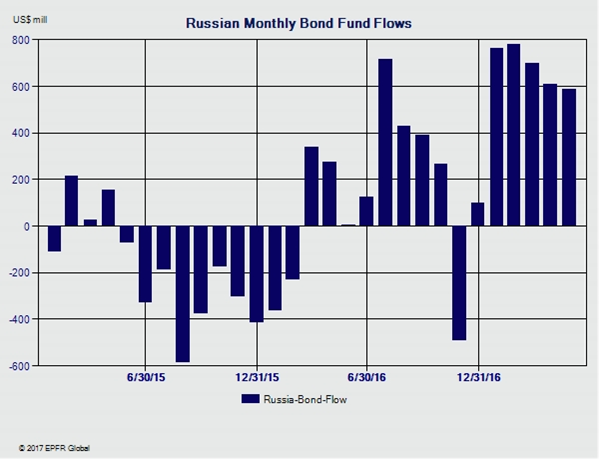 Foreign investors have made up the bulk of the buyers, as demonstrated by online lender Tinkoff Bank, which raised USD300mn in June from a perpetual bond with a 9.25% yield that was nearly three times subscribed. About 70% of the investors who bought the bond were foreign, according to the bank.

However, there may be an argument to make hay whilst sun shines as a future US sanctions bill and potential weakness in the oil price could slow issuance. Recall, a bill passed in the Senate two weeks ago includes a possible future provision to ban investing in Russian sovereign debt and is likely to be approved in the House of Representatives as well (will also require approval from President Donald Trump to become law).

Turkey: Best H1 since 2013 in terms of number of deals, record best in terms of issuance (dating back to 1997) 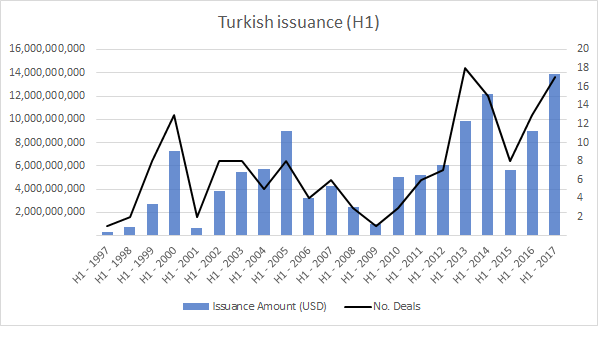 Meanwhile, Turkey contributed 17 deals for a total of USD13.9bn, thanks to a steady stream of issuance from banks, particularly after the April 16 constitutional referendum that helped spur a broad relief rally in domestic assets. So confident of a receptive market were the likes of Yapi Kredi and Vakifbank, that they chose to forgo any pre-marketing. The sovereign itself also made five trips to the market for a combined USD7.25bn that included a 30 year USD bond that extended the Republic's well stocked curve out by 2 years, the first EUR debt offering for three years and a Sukuk.

This also reflected in a strong run of net monthly inflows into Turkish bond funds. 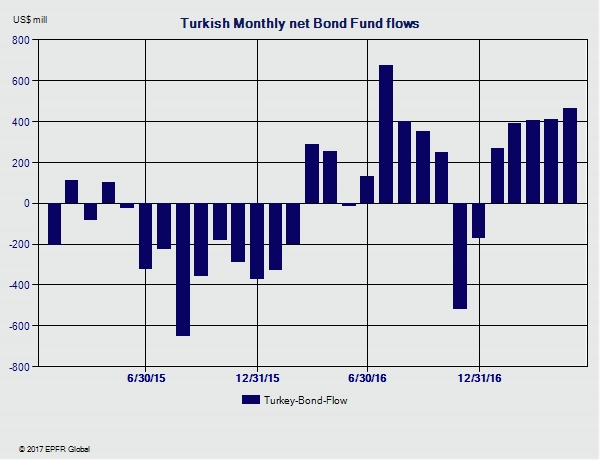 Africa brings the yield to the party

Africa: Best H1 on record in terms of number of deals and amount issued 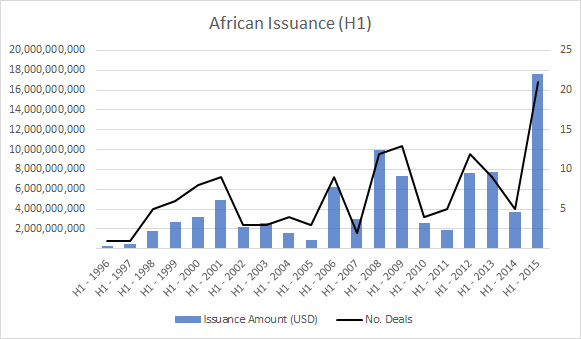 Falling yields have been a theme for a number of African sovereigns over the past couple of years amid a pick-up in oil prices, which has helped bring African issuers back onto the scene this year. Driving supply out of the region is Egypt, which has sold a hefty USD7bn so far this year (with a triple trance issue in January that was then tapped in May). Nigeria has also raised a total of USD1.8bn via the sovereign, amid strong demand, plus a further USD1.5bn from corporates. Zenith stood out on this front, as it's USD500mn 5 year issue in May helped to reprice Nigerian spreads. Before Zenith though, Senegal's USD1.1bn amortiser was a real sign of the times as it managed to reprice the whole curve for the SSA region with its average life 15 year USD-denominated bond. The USD1.1bn line attracted demand of over USD7.7bn (more than 50% of Senegal's GDP) and priced well within fair value and peers. The Ivory Coast followed suit in June, offering both USDs and EURs as it sought to take advantage of the broad decline in borrowing costs.

The pace of issuance in Q3 is expected to slow, as it normally marks the start of the summer lull, and this year has coincided with a rise in developed market yields and subsequently volatility in CEEMEA debt markets. In fact, the latest EPFR fund flows data shows that net inflows to CEEMEA bond funds slowed sharply in the latest recorded week (ended July 5), a reflection that investor appetite maybe waning. 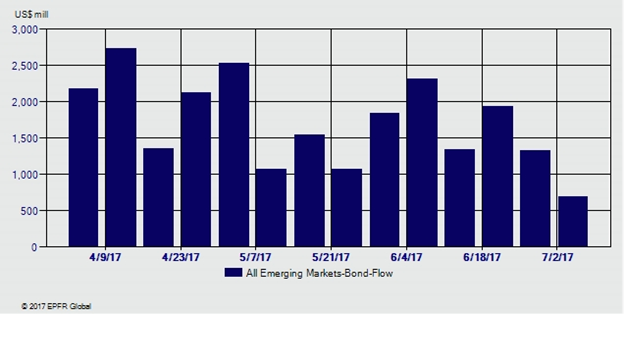 The Middle East has in the past few years provided a steady stream of bonds to keep the pipeline ticking over in Q3. However, this year the region has been gripped by the Qatari crisis and lower oil prices, whilst wider EM markets have been rattled by the so called mini-taper tantrum caused by hawkish G10 CB speak in June, that has pushed up developed market yields - and so Q3 could well be a quiet period of reflection after the bumper H1.