** Primary supply in the single currency slowed on Thursday where only EUR2.395bn of IG/HY paper priced compared to EUR4.03bn on Wednesday. For the pricing steps on the day's trades see IGM's DAILY EUR NICS & BOOKS

** The largest deal on Thursday came courtesy of Atlantia SpA which extended its EUR benchmark curve with a new EUR1bn Jul 2027 deal. The bond attracted blowout demand of around EUR4bn which allowed the issuer to bring the deal flat to fair value having ramped pricing in by 18bps from IPTs. The deal was bid 6bps tighter on the break. Elsewhere, Volkswagen hit the screens for the sixth time this year, printing a GBP300m Sep 2022 line. For more on both of the day's corporate deals and a recap of Wednesday's trades see the IGM CORP SNAPSHOT

** In the FIG space, conditions remained receptive, allowing Bankia SA to price its EUR750m PNC5 AT1 50bps inside starting IPTs, representing a slender NIC of 5-10bps. That came a day after CaixaBank priced a EUR1bn 11NC6 T2 trade flat to its existing curve having attracted EUR2.5bn+ in orders. See IGM's FIG SNAPSHOT

** There was also Dollar supply on the day from BNG which priced a USD1.5bn Jul 2020 floating rate note in with area guidance at 3mL +10. Books were last seen at over USD1.5bn

At the time of writing there were no confirmed deals for the traditionally quieter day of Friday. There are, however, several issuers which remain in the wings, as follows:

** Lietuvos Energija UAB (BBB+), is eyeing an expected EUR200m 7-10yr Green Bond via BNP Paribas and SEB after the conclusion of a roadshow which began last Thursday

** Markets fall into the shadow of Friday's US NFPs, EU stocks head south while synthetic credit indices widen. US ADP Employment weaker than expected while jobless claims were higher than forecast

** Brent turns positive but fails to make up for Wednesday's 3.67% decline 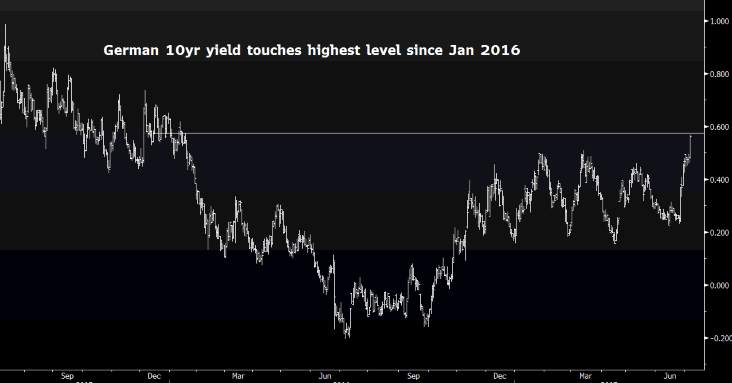 ** Data: Spotlight on US Non-Farm Payrolls as markets look for clues on US Fed tapering. Also watching Industrial Production figures from UK, Germany, France and Spain, as well as Italian Retail Sales and UK Trade figures

** Supply: There are no significant term auctions scheduled in Europe or US on Friday 7th July