** With market participation thinned due to the US Independence Day holiday, it was another measured session for the European primary market on Tuesday. In total, EUR7bn priced in the single currency although EUR6bn of this came from just the one borrower (more on EFSF below). Elsewhere, Dexia Credit Local and AA Bond Co issued a combined GBP1.25bn of sterling paper. For a breakdown of Tuesday's EUR trades, see IGM's DAILY EUR NICS & BOOKS

** EFSF spearheaded supply with the issuer accounting for 85% of the day's overall total. The SSA issuer took a two-pronged approach to pricing, refreshing its EUR curve with EUR2.5bn 8yr and EUR3.5bn 31yr tranches which printed at m/s -11 and m/s +26 respectively. Demand for the issues finished up at a combined EUR10.35bn with the final NIC seen at around 2.5bps on the 8yr and a larger 3.5bps on the 31yr. See earlier IGM SSA PREVIEW for relative value analysis

** After conducting a roadshow last week, Kommunalkredit Austria AG hit the screens Tuesday with a debut EUR300m 4yr Social Covered issue. The deal landed at m/s +38 having been squeezed in from initial guidance of m/s +low 40s with books at over EUR450m. For more including the official comps list for the trade see IGM COVERED SNAPSHOT

** Away from the covered arena, the only other FIG deal on the day came via Muenchener Hypothekenbank eG which extended its senior curve with a EUR250m 7yr that was well over twice covered while secondary spreads generally tightened in thin market conditions. See IGM's FIG SNAPSHOT

** The corporate market was devoid of EUR issuance but there was some Sterling paper courtesy of AA Bond Co which printed a GBP250m 6yr secured bond at UKT +205, from a +225 area IPTs starting point on the back of books around GBP1bn. Elsewhere, China National Chemical Corporation hired leads for a roadshow and a potential USD Reg S line. See IGM CORP SNAPSHOT

** The ECB released its CSPP update on Tuesday, with the central bank revealing it held EUR96.62bn of corporate securities as of 30th June, with the latest data pointing to an implied monthly purchase rate of EUR7.38bn. See the IGM CSPP REVIEW for more

At the time or writing there were no confirmed deals for Wednesday although with US market participants back we may see some opportunistic supply. Several issuers are in the pipeline as follows:

** Annington Funding plc (BBB/BBB) recently held a roadshow via Barclays and JP Morgan ahead of a potential multi-tranche Sterling and/or Euro transaction, with short, intermediate and long tenors

Lietuvos Energija UAB (BBB+), is eyeing an expected EUR200m 7-10yr Green Bond via BNP Paribas and SEB after the conclusion of a roadshow which began last Thursday

** German curve generally underpinned by risk-off price action in equities. although 30yr underperforms as market absorbs ultra long supply from EFSF with 30yr German yield up as much as 26bps from recent low of 1.017% on June 26th

** Brent was set to post marginal gain Tuesday, having gained 10.39% over the past 8 sessions in a row. Gold currently on course to close in the black for the first time in three days having hit its lowest level since 11th May on Monday

** iTraxx indices sea-sawed, Main and Crossover currently both on course to tighten a tad with no major breakthrough in levels 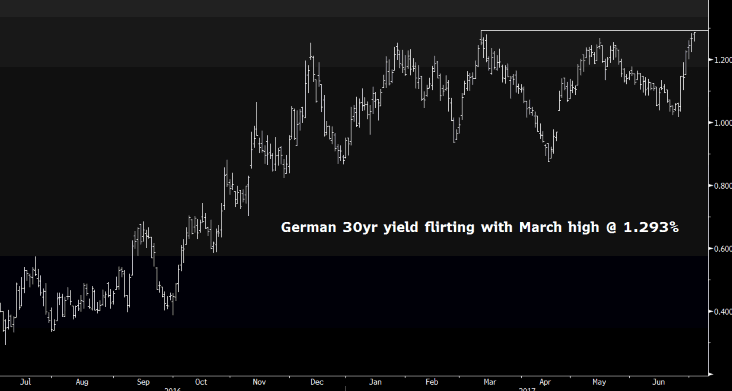 ** Data: Europe reports Services PMIs with focus on the UK version post Brexit, estimated at 53.5 (prev 53.8), the weakest level since February 2017. Eurozone reports Retail Sales figures for May before attention shifts to US Factory Orders and Final Durable Goods Orders