DAILY CLOSE: Supply picks up but demand far from robust

** SSAs were the busiest with four issuers tapping the single currency for a combined EUR3.45bn, spearheaded by a EUR2bn 7yr from CPPIB Capital Inc, whilst KBN and IADB hit the Dollar market. In terms of the day's EUR deals, CPPIB found favour with investors where demand for its deal reached over EUR3.1bn, whilst Unedic's EUR250m Mar 2026 tap and Hessen's EUR500m 7yr LSA appeared to find the going tougher with books last communicated at just EUR480m+ and EUR450m+ respectively. No booksize was communicated on Chile's SEC-registered May 2030 tap

** Fonciere des Regions printed the only the only corporate benchmark of the day seeing the issuer extend its benchmark curve with a EUR500m 10yr line that landed at m/s +85 from a +95/100 area IPTs starting point. Demand was far from a blowout at just EUR850m (1.7x covered). This after Monday's deals from TenneT and Hemso Fastighets AB also received a tepid investor response with the trades only 1.3x covered, significantly less than last week's average cover of 2.815x, suggesting that investors are perhaps being a bit more selective. For relative value analysis on Tuesday's FDR deal and info on a Red El�ctrica tap, see the IGM CORP SNAPSHOT

** Skandinaviska Enskilda Banken AB (SEB) was the sole visitor to the covered market Tuesday, with the borrower's EUR1bn 7yr line marking its first Swedish covered bond since Feb 2016. The deal was issued at m/s -5 while books finished up at around EUR1.2bn. See IGM's COVERED SNAPSHOT for more on this and details of a covered mandate for Deutsche Hypothekenbank

** FIG issuers stayed on the sidelined on Tuesday although Intesa Sanpaolo SpA held investor calls ahead of an inaugural EUR500m no grow 5yr Green deal which could launch as early as Wednesday. For relative value analysis and a recap of Monday's long date senior issue from AIG, see the IGM FIG SNAPSHOT

** Deutsche Hypo has hired Deutsche Bank, DZ Bank, HSBC, NordLB and UniCredit to lead manage a EUR500mn no grow 8yr Hypothekenpfandbrief transaction which is expected to be rated Aa1 (Moody's)

** EU risk assets rally as tech stocks recoup some of Monday's hefty losses.Price action follows a recovery in US and Asian stocks overnight 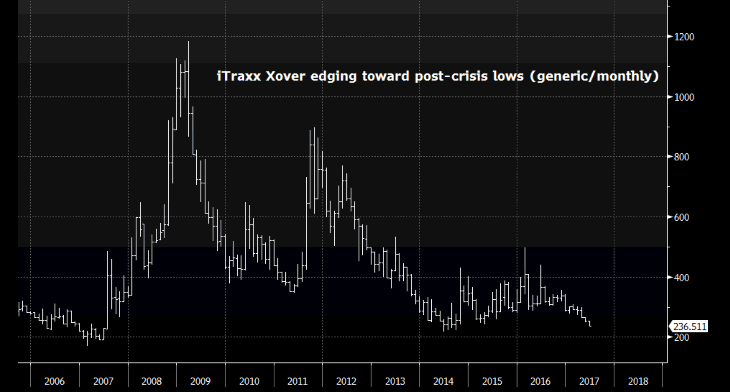