** Primary activity was limited to only one US Dollar deal from NRW.Bank as borrowers stayed away in an event risk dominated session which saw the latest ECB meeting and polls open for the UK Elections

** Looking at the NRW.Bank deal in a more detail, the SSA which is rated Aa1/AA-/AAA/AA+ and guaranteed by the German Federal State of North Rhine-Westphalia printed a USD1bn Jun 2019 floater at 3mL +6 from a 3mL +7 area guidance starting point on the back of demand over USD1.5bn

** After blockbuster transactions from AT&T and Volkswagen on Wednesday, the corporate sector drew a complete issuance blank. The aforementioned deals went on to show mixed performances post pricing, whilst there was an addition to the pipeline in the form of Ferrovie dello Stato Italiane SpA. For more on this and a recap of Wednesday's deal see IGM's CORP SNAPSHOT

** In FIG, markets continued to digest the news of Santander's purchase of Banco popular, with the mood remaining constructive and recently issued AT1 paper from Spanish banks remaining well bid in the secondary market. For more see IGM's FIG SNAPSHOT

** At the time of writing there were no confirmed primary deals for Friday, with most borrowers expected to stay side-lined and wait until next week before pulling the trigger on a new trade 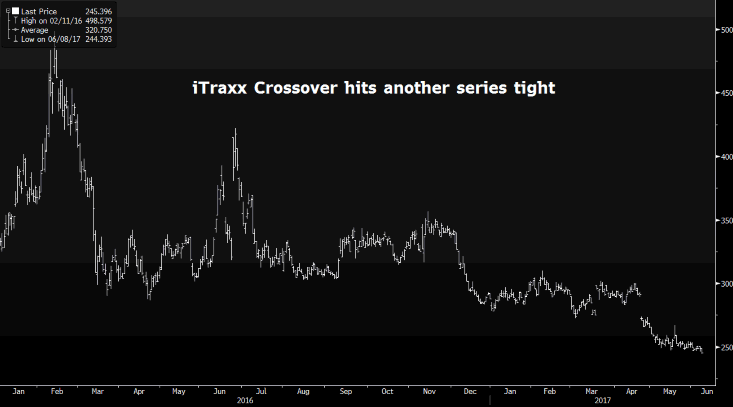 ** Data: Germany reports April Trade figures, while both France and the UK release Industrial and Manufacturing Production. UK also reports Trade numbers. No top tier data out in the US

** Supply: There are no significant term auctions scheduled in Europe or US on Friday 9th June