** Issuers rushed to lock in funding on the final day of May and also before payrolls on Friday and the ECB next week. EUR11.85bn was issued in total, up sharply from the EUR4.45bn sold Tuesday. See DAILY EUR NICS & BOOKS

** The corporate market spearheaded activity on Wednesday where no less than 10 separate issuers spanning the credit spectrum went head-to-head across a range of currencies and maturities. For new issue details see the priced deals table here or the IGM CORP SNAPSHOT for commentary including relative value analysis

** SSA Euro supply was spearheaded by NWB Bank with a dual tranche EUR1.5bn 7yr and EUR500m 15yr Affordable Housing Bond, which saw demand skewed toward the 7yr despite the final spread being tightened 4bps from IPTs, outlining a final NIC of circa 1.5bps. Also in Euros, HSH Finanzfonds extended its fixed rate benchmark curve with a EUR750m 8yr exercise, while KfW increased the size of its existing 06/2024s by EUR1bn

** CaixaBank wrapped up roadshows on Wednesday for a EUR benchmark AT1 (PNC5 or PNC7) via Barclays and SG CIB as Structuring Advisors and Joint Lead Managers, and CaixaBank, J.P. Morgan and Morgan Stanley

** EU risk assets gained positive momentum in the first half of the session but then fell back as Wall Street opened lower, while Sterling weakness pushed FTSE100 to a new record high

** Brent extends Tuesday's decline in the run up to Wednesday's EIA crude inventory data, hitting a three-week low in the process 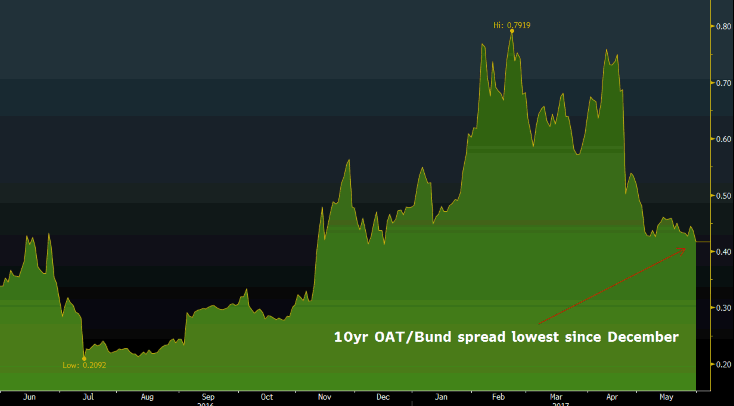 What to watch Thursday

** Data: It's May final Mfg PMI day in Europe, while peripherals report for the first time. Italian final Q1 GDP is expected to match the flash est at a steady 0.2% QoQ. UK releases May Nationwide House Prices. Across the pond, watching ADP Employment Change ahead of Fri's NFPs, while the ISM Mfg index is seen softer