** Excluding Italy's BTP/CCTS taps which were launched as part of an exchange, the Euro primary market was devoid of issuance on Thursday with borrowers staying on the sidelines due to the partial European holiday (Ascension Day)

** This leaves us with a total of EUR22.825bn Euro supply for the week (excluding Italy), barely more than half of last week's primary haul of EUR42.405bn

** With Thursday's blank, corporate supply remained at EUR5.6bn which falls well short of last week's EUR15.45bn total which took the accolade for the busiest week year-to-date. Elsewhere. Wednesday's corporate deals from Global Switch and Ansaldo Energia S.p.A. went on to perform well in the secondary market whilst there was a tightening bias among the other most recent corp deals. For our full secondary market performance tracker and a look at the pipeline see IGM's CORP SNAPSHOT

** In FIG, the week was on course to deliver just EUR2.7bn in total supply (ex-covered), down from EUR6.4bn the prior week. Light supply conditions were accompanied by further narrowing in spreads on most recent deals. See FIG SNAPSHOT

With many investors likely to bridge the gap from Thursday's Ascension Day holiday until the weekend and the fact that there are no confirmed deals for Friday, we have potentially seen the last of primary supply of the week

** A drop in oil prices, to their lowest level this week amid an unwinding of longs, weighed heavily on energy stocks ahead of an OPEC presser at 16.00 BST on Thursday with expectations centered on an extension to production cuts to help stem ongoing oversupply concerns. Price action follows a drop in oil prices below USD54 on Wednesday, which followed gains in 9 out of 10 sessions prior to that

** Govvies decouple from stocks with EGBs advancing higher, dragging yields down circa 2-4.4bps in the 10yr space. 10yr spreads versus Bunds widen across the board

** VIX was hovering just above its YTD and 24-yr low as last Wednesday's 46.4% spike faded from memory 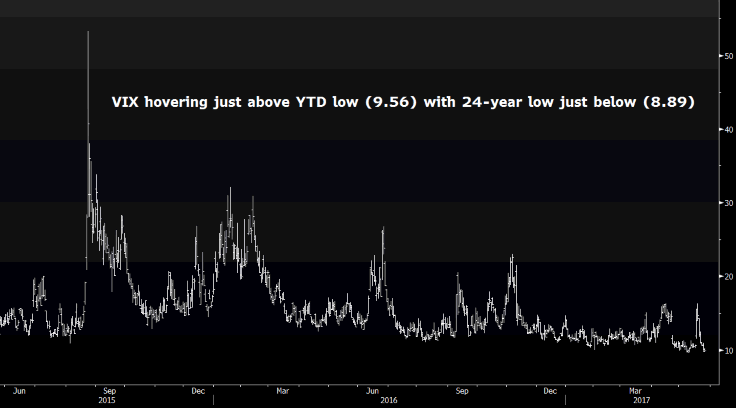 ** Data: There are no top tier releases out in Europe. Italy reports sentiment indicators. Focus lies on the US where Q1 second estimate GDP Annualised is seen firmer QoQ. Also watching US Durable Goods Orders and Final UoM Sentiment

** Earnings: Only 1 Stoxx600 company is expected to report in the shape of Swiss Prime Site

** Holidays: Some players are expected to bridge Thursday's Ascension Day holiday into the weekend. Attendance by UK and US players will be reduced on approach to the holiday weekend, ahead of which Friday will also see cash UST markets close early. Note China is closed Monday too