** It was a frenetic session in the European primary market on Tuesday where EUR21.68bn of IG/split rated paper printed in the single currency whilst there was also GBP5.3bn of Sterling supply for investors to get stuck into. For more on Tuesday's deals see the respective IGM DAILY EUR NICS & BOOKS and IGM DAILY GBP NICS & BOOKS reports

** The day's EUR issues were met with an enthusiastic response from investors as reflected by the combined booksizes which totalled an eye-catching EUR63.52bn, with this figure even more impressive when considered this total doesn't include the demand for the Deutsche Telekom (EUR750m 9yr), IBM (EUR2bn SEC-reg 8/12yr two-part) and Hoist Kredit (EUR80m 10NC5 Tier 2) deals

** Supply was spearheaded by the Republic of France which raised EUR7bn via its long-awaited May 2048 OAT. The deal was met with blowout demand of over EUR31bn which saw the deal land at FRTR +12 from a +mid-teens IPTs starting point. For relative value analysis on this as well as a look at the KBN EUR1bn 10yr and Kommuninvest USD500m 4yr Green lines, see earlier IGM SSA PREVIEW. Details of a dual-tap transaction from the Republic of Slovenia can be found here

** The corporate sector was the busiest in terms of the number of deals where a total of 9 tranches printed for a combined EUR8.1bn, led by an M&A driven EUR4.5bn four-part from LVMH Moet Hennessy Louis Vuitton which commanded total books over EUR14bn. For more on this and the day's other corp deals from IBM, Deutsche Telekom, Groupe Bruxelles Lambert and Rallye S.A see IGM CORP SNAPSHOT

** In FIG, the senior market was back in the spotlight as 10yr deals from Wells Fargo (EUR1.5bn) and BFCM (EUR1.25bn) attracted combined orders totalling EUR5.4bn+. Both deals landed with single digit NICs. Secondary spreads exhibited selective widening though, suggesting that a degree of supply-related resistance could be building. See IGM's FIG SNAPSHOT: Focus switches to senior market

** Federal State of Schleswig-Holstein (AAA by Fitch) has mandated HSBC, LBBW, Nordea and NordLB to lead manage a EUR350m no grow tap of its existing 0.5% May 2026 LSA

** European risk assets were biased firmer following a mixed start to the day and supported by better-than-expected US Industrial Production figures, while synthetic credit indices tightened. FTSE100 carves out another fresh record high

** Brent remains firmly above the psychological USD50 mark, on expectations of an extension to OPEC led production cuts to March 2018 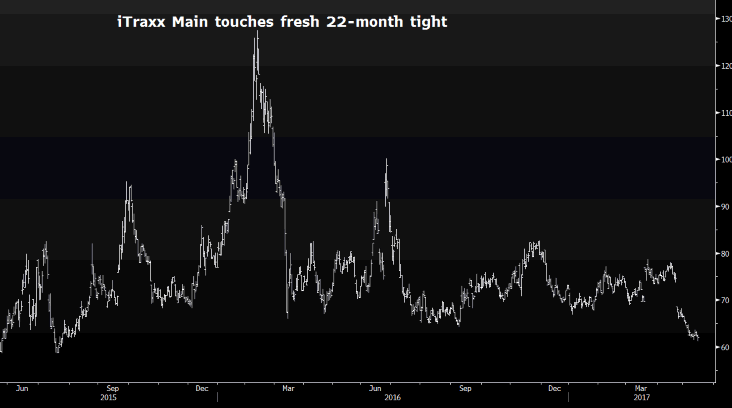